Update: Steven Lim vs Aaron Tan: http://www.lukeyishandsome.com/2012/02/steven-lim-vs-aaron-tan-third-figure.html
"Welcome to the World's Most Handsome Guy Official Fan Web!"
No, that is not my blog's latest welcome slogan, although it it would good to use it since I already call my blog LUKEYisHandsome.com, but apparently someone beat me to it and claimed to be the world's most handsome guy. So I though it would be natural for me to write about him and try to figure for myself if he is the handsomest person on Earth. And I thought that I was already narcissistic enough.
Ladies and gentlemen, if you have yet to know, Mr Steven Lim, one of Singapore's must know "celebrity". Famous for all the wrong reasons, you might say, and he comes in yellow:
Does it somehow reminds you of Phua Chu Kang's yellow boots? 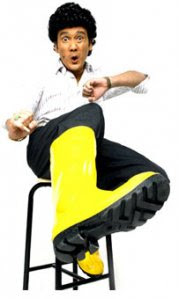 A signature clothing that covers your, err, not so clean part of your body, that is.
Well, it's not that I chose to blog about him out of the blue but a few hours prior to this post, the name of Steven Lim was actually one of the trending topics in Singapore's Twitter scene. Trending is a good thing right? Well, not so when you happened to be Steven Lim and the first hashtag used against you is #GodSaveSG. 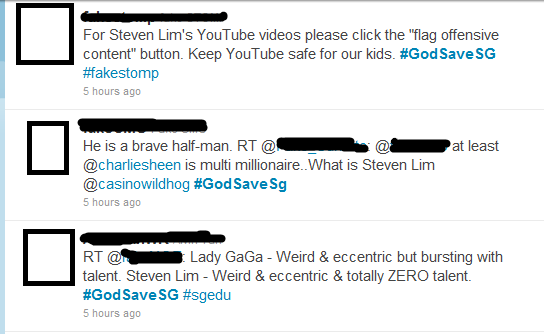 The whole craze was started when Steven Lim first tweeted about his new girlfriend from his Twitter account. You might think that it is normal right for a guy to tweet about his girlfriend in Twitter. It is a show of undying love after all and everyone is just probably jealous.
Probably, or not because you see, there is but one big major problem with Steven Lim and his declaration of girlfriend. Steven Lim happens to be 35 years old this year and according to him, his girlfriend is 16 years old going on 17. That is like, what, 18 years of difference?
I do not know about you guys but dating a secondary school girl when you are more than 10 years older than her is definitely something wrong. Imagine having your daughter going out with someone your age in the future. Makes you wonder about his motives right?
(For a complete coverage of Steven Lim's funny, delusional and simply unbelievable tweets since the moment he started trending, someone has compiled a list of it in this blog here: http://realfass.blogspot.com/2011/03/37-16-disaster.html)
But as far as I can see it, it could be a hoax or a publicity stunt for all I know. Kinda reminds me of the Kenneth Tong's pro-ana incident. It might be true, nobody knows, but there's no photo, confession or things of the like yet so far but we will see tomorrow. And I'm saying that it might be a publicity stunt because everywhere I see in his Twitter replies, there's a link to his videos and website, so yeah.
If you have no idea who is Steven Lim, you really should if you happen to be staying in Singapore. Because you're bound to come over him sooner or later. Here's a couple of videos to get you started (since he kept spamming these links in his Twitter). These videos are not for the faint hearted though. You might want to prepare a bucket just in case. Consider yourself warned:
Certainly reminds me of the "Leave Britney Alone" video.
And the best one?
Makes you want to throw a grenade at him right?
And if you're feeling investigative, you could always visit his website. To end off today's post, let me present to you Steven Lim's quote of the day:

Not to forget the text message for the day:


Update (5th March): Steven Lim uploaded the picture of his "girlfriend" unto his website but without first colouring her eyes black and putting 2 red circles on her cheeks. 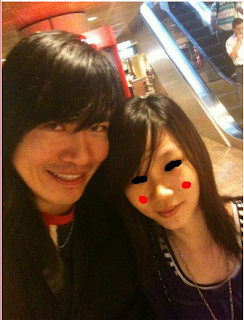 It's either his doing it for privacy purposes (which I highly doubt so, since he loves parading his girlfriend around) or because the girl inside the picture isn't his girlfriend at all, which explains the cover up in case people manage to track her down and get the truth from her. It still doesn't explain the 2 red circles though, maybe he loves Pikachu but that's just a speculation. Either way, I wouldn't be surprised if his girlfriend really looks like that it real life. Like they say, birds of the same feather flock together.

Scientists from around the world are now still trying frantically to solve the mystery of the reason of why such a girl would fall for a guy like Steven Lim. So far they have found nothing.
Labels: Personalities Rantings Singapore