Have you ever noticed that how in almost every anime, movies, stories or games that have ever been produced, no matter how bleak the situation may seem, the hero always seem to unleash a certain type of hidden power to defeat the villain and save the day as long as the desire to save and protect others is strong enough?
Take for example a guy whom we shall call Lukey. As the usual storyline goes, evil monsters suddenly invaded his homeland one day and threatened to destroy everything that he cherishes. Not wanting to just sit back and watch, he set out on a journey to bring down the mastermind evil dude. It was a long and difficult journey, but eventually, along with his friends that he would find along the way, he finally managed to reach the evil boss and forced a final confrontation with the evil boss to defeat him and restore peace to the world.
Of course, it wouldn't be much of a story if the evil boss was easily defeated and before long, our hero realized that he is not able to bring down the boss and was struck with a critical blow from the evil boss. Just as all seem lost, a sudden flashback of the heroes' friends ignited a hidden power within Lukey and eventually, he manages to defeat the evil boss and restore peace thanks to the desire to protect his friends.
So that's how the story usually goes. As long as your resolve to protect your friends is strong enough, you'll be able to unleash a hidden power within you, defeat the enemies before your eyes and save the day. That's how all stories go. So I decided to give it a try the other day when I realized I have exam and have not done anything to prepare for it. 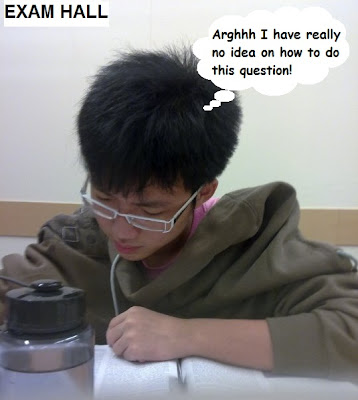 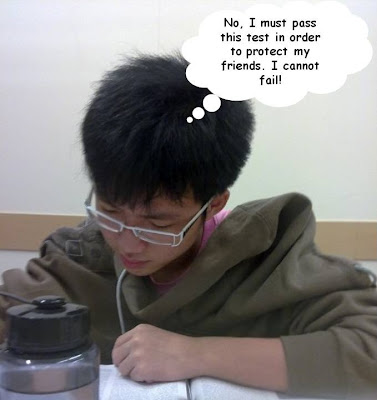 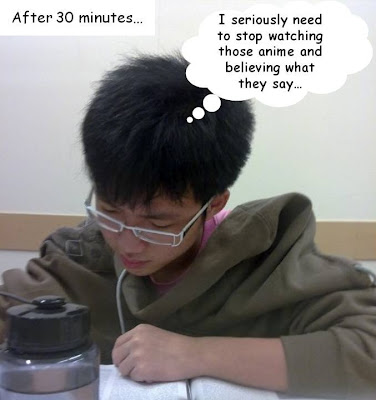 And as the story goes, Lukey was in fact utterly defeated by his exams although he has a really strong resolve not to fail and disappoint his friends because well, just resolve without any formulas or facts is not gonna get you really far when the final evil boss you're facing is something called exams. And so they lived sadly ever after and evil still prevails in the form of examinations in our world today. The end.
Labels: Random Rantings Studies