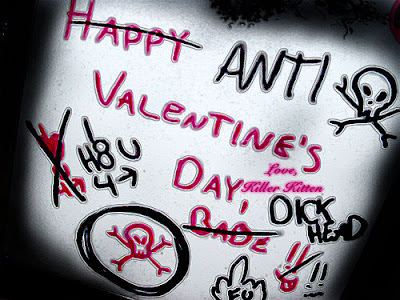 I came across a funny video today. It's an interview of a Ustazah Siti Nor Bahyah about why the celebration of Valentines Day is considered as "haram" or forbidden according to the laws of Islam.
According to her, a devout Muslim should not celebrate Valentines Day because of the origins of the day itself. She gave loads of claims of how Valentines Day originated, most of it overly exaggerated, like how in ancient Rome a guy would pick up a bottle containing a girl's name and the girl would then be "used" to satisfy all his needs for a duration of one year, to give the feel that Valentines is all evil because it's filled with lust etc.
The claim wasn't entirely true, by the way. The pairing of the guy and girl would only last for the night of the festival itself and only in certain cases where the duration would extend to a year and which after that, would often be accompanied by marriage. Consider this as modern day courtship because youths during that day were heavily segregated and the festival was the only chance to meet someone from the opposite sex.
Another more hilarious claim was how Valentines Day is supposedly to honor the day where one of the Muslim civilization in Cordoba (or Cordova as she said in the video), Spain was overthrew by this guy called Valentine.
She goes on to say that if young Muslims celebrate Valentines, is as if that they are supporting the Christians and the English (I wondered how English got tied up with Christianity) against Islam and that they are being a part of Christianity.
I have no idea where she got her historical facts from but from my Google searches, the Islamic (Muslim) civilization in Cordoba did not fall in a single day thanks to some war hero called St Valentine. But rather it was the bickering among the Muslim leaders at that time, combined with the pressure of Christian states, that brought Cordoba down. And mind you, there's no history detailing a day that was set aside to remember the day. Source: http://www.bbc.co.uk/religion/religions/islam/history/spain_1.shtml
She's smart. Mixing a little bit of history with fiction and playing on religious feelings to stoke the fire.
And she did not just stop on creating false historical facts. She goes on to say that the actions done on Valentines day are immoral ones such as going to disco, making out and having sex. Not satisfied with that, she showed her level of prejudice by further claiming that the immoral actions mentioned above can only be done by Christians and not Muslims.
Isn't it funny to see how a simple message got turned into one full of hate? Rather than educating the young about the dangers of uncontrolled lust and the wrong message about Valentines Day itself, she's blaming the Christians for the social ill that is happening among the youths.
Why can't she lecture about the true meaning of Valentines itself? That it is a day to shower the person you love, be it your wife or husband, with affection, like telling them how much they mean to you rather than painting it as a completely evil day, coupled with a we-vs-them mentality inside? Why can't she teach others how to be accepting and treasure the diversity among us?
Seems to me like she's using the same old mechanism that politicians love to use to garner support or to solidify their base of power. First, paint something or in this case, some day as evil. Then, attribute it to an out-group, preferably an age old enemy like the Christians (or Chinese, as done usually in Malaysia) and incite fear among the populace of how if this goes unchecked, your own culture would be lost. Make them feel as that they are threatened. And then, offer them a solution to a problem that does not exist in the first place, a solution that involves people looking at you as some sort of savior.
Perhaps the reason why she hate Valentines so much is due to the fact that no guy dares ask her out on a date. Which is why she would not want others to celebrate Valentines too. And for those of you who can understand Malay and would want to see the video, I've included it below:-
Labels: Malaysia Rantings Religion Videos