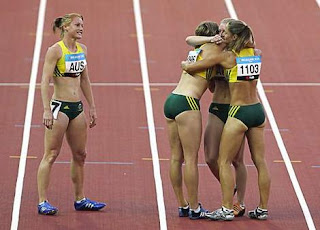 I must admit that I'm quite sensitive sometimes. And I tend to over-think myself and is able to come up with all sorts of conspiracy theories regarding a situation that is in fact quite simple.
Take now for example. As I sit here writing my blog, I could here some of my friends laughing above me, perhaps having fun together. While a normal person might just dismiss the situation thinking that perhaps it's a coincidence that they bumped into each other and happened to talk a bit longer together or perhaps they are with other friends that he might not know, I on the other hand, tends to go overboard.
Overboard in such a way that my mind will start to formulate all sorts of funny questions like why they are laughing together and obviously having fun while I'm sitting here in my room all by myself? Why am I not invited? What are they doing up there? Did they purposely left me out? Did I do something wrong to make them hate me? Mostly stupid questions. And no smart answers to it.
Depending on how my mind decides to work things out, I could either end up being pretty sad or angry next. Or both. Sad because while I try to be a good friend, I still can't seem to get accepted and still considered as one of the out-group members. Angry because of how sometimes they say that all of us are friends, how all of us are important and how we should stick together but in the end, some of us are still considered as being more important than others, even though we're from the same group of friends.
Strange, isn't it? How my brain tends to over-complicate things.
And after all of this information processing is completed, you would end up with one very emo Luke, who have an even lower self esteem than he used to because he assumed that he was left out from his friend's activities because he was not good enough to make the cut. And for the rest of the day, you could expect to see him with a low amount of energy and a face as sour as a lemonade.
You see, my mind just simply can't comprehend the fact that perhaps the situation where my friends are doing something without me can be explained in a simple manner after all, like they're having a girls night together or there were other friends who were not invited too. I just simply love the more complicated explanations for unexplainable reasons.
Like I said, I'm not normal.
Labels: Friends Rantings