One way to get yourself famous in our world today is to make some really controversial statement. I mean a REALLY controversial statement that would make everyone want to take a gun and shoot at you that type. In no time, you'll be famous around the web thanks to social media sites like Twitter and Facebook.
This is precisely what happened to this Mr Kenneth Tong who first tweeted about how being size zero is the epitome of beauty and advocates "managed" anorexia in his tweets. Not only that, he goes further to discriminate those who are not thin, or curvaceous, by saying that fat is a sin, thin is everything and the only way to achieve it is to go size zero and be an anorexic.
Of course, we all know how dangerous anorexia is, being one of the most fatal psychological disorders in the world and his tweets pretty soon got picked up by famous people all around the world. Rihanna, Simon Cowell and Sophia Bush were among the people who lashed at him for his views. And in the online world, when someone as famous as Rihanna tweets about something, all of her few thousand followers would surely be interested to know who this guy is.
In no time at all, Kenneth Tong became one of the trending topics in Twitter and gained almost 16k+ followers (at the time of writing) immediately after. If it's attention he's seeking for, he's got it alright. Lots of it, in fact.
It's good to see so many people banding together to challenge his view but what we may not realize is perhaps we're playing right into his game. All these publicity may indirectly helped boost his popularity on the web (me blogging about him doesn't help much either) without him having to do anything. It's publicity for free and for all I know, girls may have started to contact him already for his so called "size zero" plan.
But I guess this is how social media works nowadays. There's really no such thing as negative or positive publicity. Once you're famous, you're famous. For all we know, he could be sitting behind the computer smiling to himself over all the traffic that he would soon generate, not to mention the cash that will be soon accompanying it.
But who is Kenneth Tong actually?
A quick Google search led me to believe that he isn't actually any good guy either, declaring himself as a playboy of some sort and turns out he's some Big Brother 2009 Top 10 contestant before. And this isn't the first time he landed in the news for the wrong reason. Apparently he was warned to stop flirting before on the Sun newspaper here: http://www.thesun.co.uk/sol/homepage/showbiz/big_brother/2545284/Kenneth-Tong-warned-to-stop-flirting.html. Seeing the various results about him led me more to believe that this is perhaps a publicity stunt by him.
Take this Tweet from him as example:

Obviously if you read the Tweet alone you would think that he is perhaps influencing lots of people out there into adopting his distorted view of beauty. Which prompted many others to believe that he is in fact a threat and needs to be shut down. But an extra click to Shaunna_D's profile revealed otherwise. 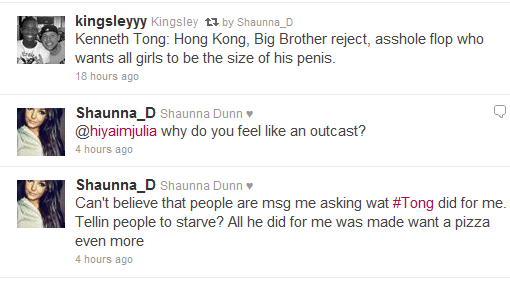 Seeing all these things, I wouldn't be surprised if he decides to announce tomorrow that he was just joking or he is doing some sort of experiment to see how famous he would be.
That wouldn't still explain how the 16k+ followers came about though, but I hope this would make you twink twice about who this guy really is and what he really wants.