Perhaps one of the most elaborate campaign and perhaps first of its kind in the online world, Kenneth Tong has admitted today that this whole size zero pill thing and managed anorexia should be supported is nothing but a hoax.

Looks like what I suspected in my previous posts here and here about how this entire thing about Kenneth Tong just wanting to get famous  is real after all. Just 13 minutes ago, when I decided to search on him again in Twitter, out of curiosity to see how far he had go, a Twitter confession from him reads:

"I think it is time for to come clean. The whole size zero thing is a hoax. It came about after an interesting discussion I had with a friend of mine. The discussion centered round whether it was possible, to go from nowhere to be a globally recognized figure within a week harnessing the power of the internet and specifically Twitter, which I have always maintained is a better medium than national TV. My friend said it wasn’t possible. I said it was. To prove him wrong, I decided as a hoax to promote via Twitter something that was universally appalling, I chose managed anorexia. I would like to make it clear, I chose the subject as a hoax as I knew it’d be appalling to men and women. The campaign has worked; I have been a Trending topic on Twitter for over a week. I am scheduled to appear on TV, the Press and Radio shows, over the course of the next week: Grazia, Telegraph, The Sun, The Sunday Times etc. Now it’s time to come clean and stop the bandwagon. My honest personal opinion on managed anorexia is it is an disgusting and illogical idea. It is a mental illness. It cannot be managed. To all the people I have offended as part of this scientific experiment, I would like to apologize to you and to show my sincerity I will making a sizeable donation to beat: the leading UK charity for people with eating disorders and their families. Furthermore, I have decided to auction my custom Apple iPod Nano watch on Ebay, the proceeds from this will be going to the charity, beat." 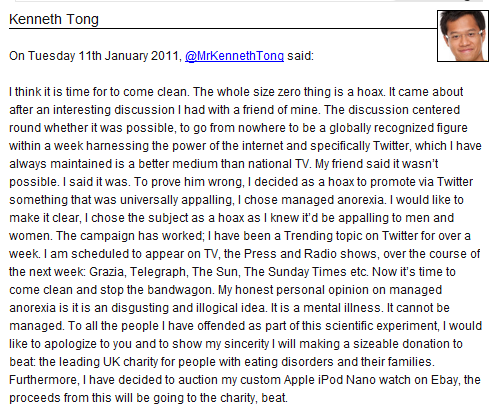 I guess that's it then. More than a few million Twitter users being fooled into thinking that he is really dangerous and even launched loads of campaigns against him, branding him as stupid and idiotic when in fact he is the smart one behind this whole campaign. Gotta hand it to him for managing to get even celebrities like Rihanna, Simon Cowell and Gordon Ramsey, among the few, to support his publicity campaign.
And I think it's safe to say that this whole Kenneth Tong and anorexia mania has finally ended, after almost one week of Twitter chaos. If there's one lesson that we can all take away from here, it's not to underestimate the power of social media, like Twitter, in influencing other people and disseminating information. And not forgetting to run background checks on the next fellow who decides to get famous again by promoting something equally appalling through Twitter.
Speaking of which, perhaps it's time for me to start a Twitter campaign of my own considering how often I complain about not being famous enough. Now what appalling topic should I choose?
Labels: Funny Online World