Having Sex With A Corpse

I have heard of paedophilia before, a sexual disorder where a person is sexually attracted to pre-adolescent children but necrophilia? That's new. 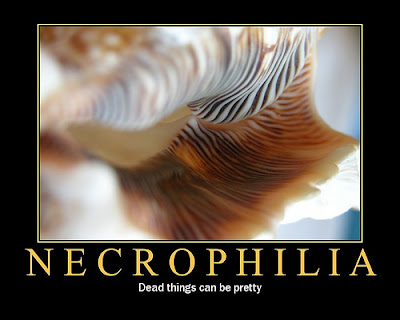 A man was recently arrested on January the 13th, 2011 for allegedly having sex with his already dead girlfriend in Ohio, USA. According to the guy, Richard Elwood Sanden, he said that he did not noticed that the woman, Rebecca Whitehead, had died during the sexual intercourse and immediately called the police and tried to administer CPR to her when he noticed that she was not breathing after the intercourse.

He had initially met the her through a telephone dating services and had been going out together for about four months now, according to statement given to police. When further questioned, he insist that he had really no idea that Whitehead was not breathing during the intercourse.

The police who managed to view a video recording of him having sex with the deceased from a video camera of his, however, seem to think otherwise (more reasons not to record all your intimate moments on video). Also, examination by paramedics who arrived at the scene put the timing of Whitehead's death way ahead of the time when Sanden called to report the death, casting further doubt on his story.


Richard Sanden was later charged with corpse abuse and necrophilia by the police for performing such an act. However, at the time of this writing, the exact cause of death of Whitehead has yet to be known and it is still unclear on how she died and what exactly transpired during the event.

If I were to add in two cents of my worth, I think that it wouldn't be surprising if this case would strike most of us as bizarre and downright weird. Who in the right mind would want to have sex with a cold dead body anyway? A search on the internet, however, reveals that perhaps necrophilia is not as uncommon as we think it is.

But why do people want to have sex with a dead person anyway? Some psychologists theorize that perhaps some of us might want a sexual partner that is incapable of rejecting us, which is why a dead person would be the ideal candidate for that.

Necrophilia or pedophilia, this just proves to me that we humans have all sorts of sexual desires. From an inanimate object like a shoe, to animals, to dead people and to people of our own gender, it seems like there's no limit on what we get turned on by. Strange, but true. Perhaps there's even people who gets turned on by chocolates. Who knows?