My Trip To Desaru (A Rough Guide)

Desaru. Prior to going there for a holiday, i have known it as just another beach in Malaysia thanks to all the Geography lessons they forced us to take during secondary school. It's not as popular as other beaches like Pulau Redang and such but when my friend suggested that our clique go there for our post exam trip, we all said yes since it's quite near to Singapore.

Getting to Desaru is quite easy actually from Singapore, thanks to the numerous info on the internet. All you have to do is to take a bus, either a CW1 or 170 from the Kranji MRT station all the way to Larkin Terminal in Johor Bahru (JB) and then switch over to Mara Liner who has a direct bus to Desaru that is 100 km away.

The first thing that i noticed about Desaru when we first reached was its  remoteness. Unlike many other beaches that are tourist attractions that i've been before, Desaru looks very much like a village to me. There are only about 5 hotels operating along the beach of Desaru and the surrounding was covered by forests. Thanks to that, you can expect to see monkeys around regularly. There's even one that had the courage to walk across my shirt in the balcony.

Another thing that i have noticed was the cleanliness and beauty of Desaru itself. The beach was to my amazement quite clean and sandy. And the sea doesn't carry with it dirty stuff like rubbish every time a wave comes by. I think the beach itself is pretty undisturbed by humans which is why it's relatively clean of any waste. Compared to my previous experience of going to a so called beach in Sentosa, Singapore, i must say that a natural beach like Desaru beats Sentosa hands down any time of the day.

One downside of Desaru, however, was the lack of things to do there. I'm the type of guy that prefers a holiday that is filled with activities like enjoying the local wonders and attractions. Not very feasible if the place you're going is surrounded by forests. We did however, managed to get ourselves on a firefly watching cruise on our first night (no photo taking allowed!) and it was awesome. Seeing those blinking lights on the tree in pitch black darkness really makes you appreciate nature more. And it was kinda romantic too to be sitting on a boat traveling the river under the light of the moon only.

Another thing that we managed to do was to enjoy the local cuisine too. Since we're next to the beach, the trip would not be complete without eating seafood, right? We took a trip down to the nearest fishing village called Sungai Rengit which is about 20+ minutes of driving away to try out the famous seafood there. And i must say that the food is awesome. The one that i liked the most was the the salted egg crab that was so delicious that i can't resist licking the sauce off my finger. It was relatively cheap too for such nice seafood.

But aside from the firefly trip and the seafood tasting trip, i must say that the beach itself is the main attraction. We managed to spend almost half our second day doing various things on the beach like collecting seashells, crabs and rocks. Not to mention enjoying those huge mini tsunami waves that hits Desaru. I'll let the pictures talk for themselves.


We also found quite a number of natural inhabitants on the beach itself. They include:-

And even a turtle! 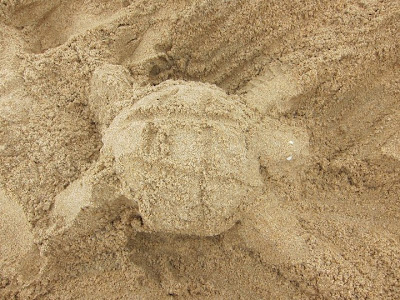 In short, Desaru is an awesome place to go if you're just looking for a place to chill and enjoy the sea breeze. And I definitely had a lot of fun with my friends. And i definitely would not mind going there again. The trip was just simply aweseome.
Labels: Friends Life Updates Malaysia Travel