Note: This will be a quite emo and personal post so if you happen to be someone who dislike reading emo blog posts, you can still click the red x on the top right of your browser. I certainly would not want this blog post to affect how you would view me. However, I need to get this out one way or another, which is why I'm gonna rant here and give you a word of caution first.
*****
Since young, I have always wanted to be a leader, someone in position of authority. I dreamed of inspiring many with my leadership and how I would bring better changes to the world as a leader. Great leaders such as Jesus, Mahatma Gandhi, Abraham Lincoln and Martin Luther King Jr were my role models. If given the chance, I wanted to leave my mark in the world just as they did. If given the chance, I would have wanted to change the lives of others for the better, just as they did. I wanted to be a leader as great as them. I thought I could and I believed that I can as long as I try hard enough.
Sadly, the experience for the past few months taught me otherwise. 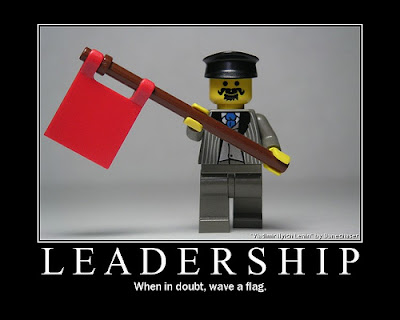 To be honest, being a leader is nowhere near easy. Being a successful one is even harder. To be honest, I would think that scaling Mount Everest is a much easier task as compared to being a great leader.
A leader for start, has to possess a decent amount of good qualities. You have to be responsible, dedicated, detailed and caring at the same time. A leader must be able to see where he is going and is able to plan the direction of his team and be able to achieve them. A leader don't only talk about what he wants to achieve and what he is able to do but instead puts those in solid actions. And a leader basically gets things done, with style. Not to mention that a leader commands respect. He/She walks around with a dignified aura. To put is simply, a leader is no ordinary human being. Which is why they are leaders.
I on the other hand, sadly, has a bunch of qualities that direct polar opposites of what a leader should have. Being carefree, happy-go-lucky, spontaneous and taking things one at a time happens to be a few qualities that I've found out to be quite unsuitable in being a good leader. Being carefree, for example, basically means that you do not worry yourself too much with petty stuff and that doesn't quite sit well with being responsible. And when a leader is not responsible, a lot of shit can happen.

Taking things one at a time too can be quite disastrous. Some might say that it allows you to focus on a single task but when you have so many responsibilities on your shoulder, focusing on one aspect makes you unable to care about others and thus leading to more problems to crop up.

I guess now I know why some people say that leaders are born, not made, because to be one, you need certain inborn traits.

Well, I can either go back to being a normal follower and stop dreaming about being a world changing leader or I change myself to something I am not (which is definitely not easy) to be a successful leader. That, or I can be the first carefree, spontaneous and idiotic leader in the world. Tough choice.
Labels: Personal Rantings