Is Dying The Answer For Love?

We all understand that love is really important in our life and breaking up is one of the hardest things to face, especially if you're the one being dumped. No doubt the feeling that you're not wanted and loved anymore by the person whom you loved so much is quite hard to stomach. But does it mean that life as we know it ends? Is it worth sacrificing your life for it?
I was greeted today with the sad news of a suicide that happened in Malaysia a few days ago. A guy with the named Alviss Kong, aged 22, apparently committed suicide by jumping off a building after breaking up with his girlfriend of four months. The suicide immediately shocked the internet community and got so big that even a local Chinese newspaper picked up the story.
One of the reasons why this particular suicide garnered a much bigger attention compared to others happening everyday was because well, the internet played a part.
When Alviss first started his relationship with this girlfriend of his, he posted about it in his blog and declared how happy he was. He had confessed five times prior to being accepted but eventually, the girl accepted him. Of course, when you finally succeed at attaining something you have worked so hard to get, it's natural to be happy, evident from his blog postings:- 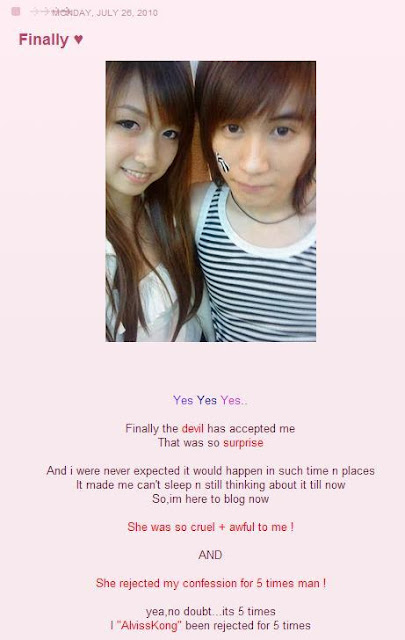 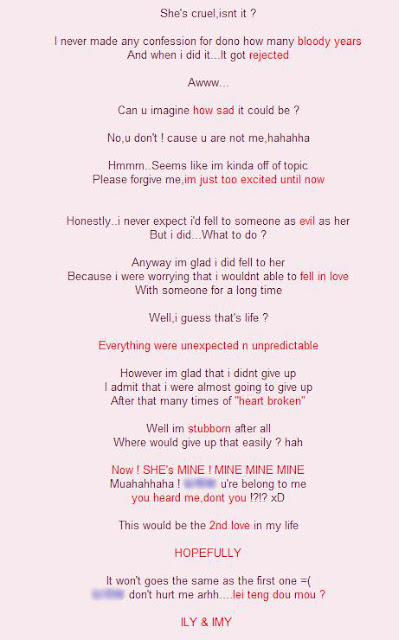 Aside from his blog post, another factor that fueled the popularity of this issue was his Facebook status update. Forty five minutes before he took the jump, he wrote that he was counting down to forty five minutes and asked what he should do in the meantime. When his sister asked him what was he up to, he said "I Love You" to his sister and later asked her to take care of his family for him. And of course his sister was freaked out and for a good reason it seems.
Forty five minutes later, the guy known as Alviss lies dead on the streets, having taken the jump.
The messages around the internet regarding this issue, being in Twitter, blogs and Facebook centered around three reactions, or three group of opinions, from what I could see.
The first was to blame Alviss himself. Many around the internet have accused him for being an idiot for going to such extreme just because of a break up. Some had even go so far to call him a pussy for being unable to face the breakup and chose the easy way out instead. There are even people who said that all this are just merely his acts of trying to gain attention and accuse him of being cruel himself because of the hurt and trauma that he would cause to his girlfriend and his family. In short, Alviss was to be blamed for the suicide and there should not be any sympathy given to him.
The second group of people, on the other hand, chooses to level accusations at his girlfriend. They accuse his girlfriend of being such a bitch for dumping a guy like him. Why do she even accept him in the first place if she was going to dump him later was the common question. To this group of people, girls like her should be punished because of breaking sincere hearts. Slut, whore and bitch are the recurring words thrown at her.
And there's the anti-suicide people who try to be neutral. "Let's not blame anyone", they say. In their blogs/Twitter/FB, all they talk about is how stupid suicide is and it should never be the option out without truly understanding the real factors that pushed Alviss to take the jump. "Call the suicide line for God's sake!" 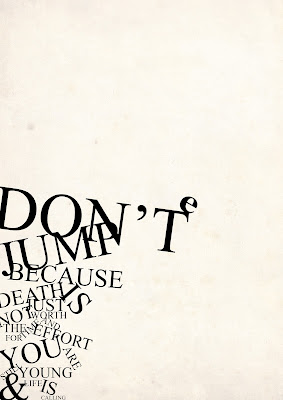 Just who is right and who is wrong? Who are the ones that should be blamed for this unfortunate event? Is there anything we can do to prevent this from happening again? Why must stuff like this happen?
When it comes to situation like this, like it or not, there's no clear black and white answer. As much as we want the world to be fair and happy and put the blame on someone, sometimes we just gotta accept the fact that things like this happen. Despite how sad and wrong this suicide seems, I sincerely believe that no one should be blamed for this incident, no matter how much we want to scapegoat someone. It's not his girlfriend's fault because she chose to dump him, it's not his fault that he did not see other choices and it's not his family fault either for failing to protect him. There is simply no one clear answer to why all these happened.
And judging is certainly not a way to make the situation any better.
Life goes on. The sun still shines. The birds still chirps.
And if we sincerely want to make this world a better place, treasure the life given to you. Never lose hope. And look out for each other. Don't forget those who are constantly around you that still believes in you. And never forget that there's someone above that you can talk to.
Rest in peace Alviss, no matter where your spirit might be. I hope you can find the happiness you are seeking for in the afterlife. RIP.