Today was not a very good day for me. Had an 8 am class which was totally unproductive, thanks to the insomnia last night. Was too euphoric to fall asleep after the news that i was Top 23 among the thousands of applicants for Standard Chartered Bank's World's Coolest Intern Competition.

Speaking of that, i wasted almost half a day trying to hunt for a suitable software that can make my in built laptop webcam record videos, you'll be surprised at how Google fails to help in this aspect, because one of the criteria that we need to fulfill was to produce a video to garner support. In the end, due to the lack of available video cameras and webcam software on the internet, i had to settle with the old fashioned choice, my handphone. My trusty N79 handphone.
So, in the end i had to record the video, bluetooth it over to the computer (because my cable is somewhere over the rainbow) which takes damn long, edit it in Premiere Pro and the cycle continues until i have collected most of the videos i wanted. The most tasking video production i ever did.
But thankfully, i managed to finish all of the required tasks to continue to be in the competition. Not entirely proud of it, but at least i can say that i've tried. So here's my submission for the Top 23 tasks!

We're supposed to come up with a Tweet mentioning why we should be the world's coolest intern. Sort of like trying to sell yourself in 140 words. Which means you need to be concise, simple and straight to the point. No beating around the bush and using flowery English.

So i decided to borrow my favorite quote from Bruno Mars and tweak it a little bit. I love the way the quote sums up everything in just one sentence. And i don't need to bother which quality or traits i should put in the 140 word constraint to sell myself.

A little narcissistic, i must admit, but hey, when you're competiting in competitions like this, you'll have to first believe in yourself before others can believe in you. And that often requires a little thick skin-ness.

I think i pretty much summed up my video production process in the first few paragraphs of this post.

But well, like they say, extreme times call for extreme measures. I had to come up with the video latest by the 4th of November. And there were no suitable hardware and software for me at the moment. Plus my mind was blank for a suitable storyboard. So i had to make use of what i have at the moment.

Not entirely proud of the video, because i know i can do better, but well, at least when i posted it to Facebook, at least it still garnered a few likes and not to mention a few extreme long laughter. Oh well, i guess a few laughs are better than none. Although the exact reason of the laughs are unknown. 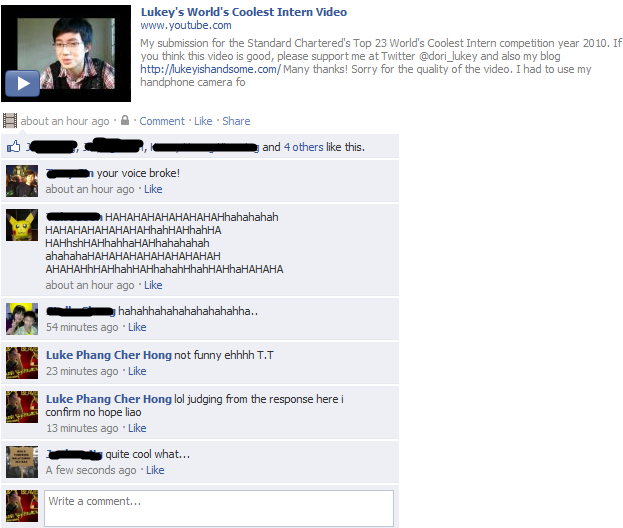 3. The Twitter Supporters
One of the criteria is to have friends Tweet their support for you. Or like your Facebook page if you have one. And that's were the problem comes. My friends don't play Twitter. And i don't have a Facebook page to ask for support. Plus i don't believe is going around begging people to support me and stuff like that. I know how that annoys people. Having someone coming to you, saying "Please like my page and like my photo, because i want to win this competition" constantly can really get unto your nerves.

I try before. I know. So i prefer to just let things work it out. I'll just do a small announcement in my Facebook and also in my blog that i'm taking part in this competition and if my entries is really good, i'm sure people and friends will support me. I want them to support me because they want to, not because i force them to. That's my principle.

And thankfully for me, although my Twitter friends are few in between, some of them still supported me. Although there are only few of them (less than 10 actually) but i still appreciate it. Thanks!

I wonder if the likes and the "hahaha" i got in the video can be counted as support for my campaign? I certainly hope so. Because if i were to go by Twitter support, all the contestants with over 1000+ followers need to do is flick their fingers and i'm out.

Oh well, if you think i'm good, you can always leave a comment beneath this post saying something like this, "I think Lukey should be the World's Coolest Intern because (insert reason here)". I'm sure Standard Chartered wouldn't mind. I think.

Doing this certainly reminded me of the days when i joined another competition almost three years back. A talent competition to be exact. It's good to reflect back on the old days. For you all to get an idea how old the day was in the competition, i will show you my first qualification video that emerged Top 10 in Malaysia:-

Can pretty much say that it was this video that started to whole video frenzy thing in me. And now i'm repeating it all over again!

So yeah, as a conclusion, as we all may like to say in essays, that's my three tasks for submission to the World's Coolest Intern competition. I have no idea of my chances to win, but that i'll leave it that to the people at Standard Chartered to decide.

As for me now, life goes on. 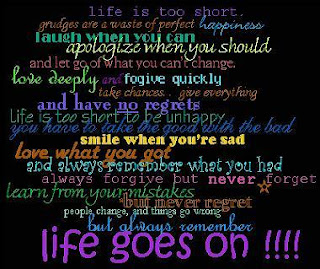 Which basically means assignments, deadlines, readings and CCA commitments. Fuh... stress. Wish me luck for the competition and don't forget to include a comment if you want to support me! Chiaoz!
Labels: Blogging Competition Life Updates Rantings