Failing for a Purpose

Exams are finally over! For the third time since in university, that is. Of course, when next semester comes in one more month, the cycle is gonna start all over again and i'll be worrying about exam in no time then but i think i'm just gonna chill and relax for the time being. Maybe watch some anime, play some games and try to find myself a girlfriend at the mean time.
Speaking of exams, i had an interesting conversation about exams today just after dinner. You see, at where i am currently studying right now, there's this really funny system of grading students, as the rumor goes. And this funny system is called the bell curve system.
Which means that aside from worrying about being able to do the test, we must also worry about not ending up in the bottom of the bell curve because well, if you're at the bottom, your grades will tend to follow. So there's basically a lot of things that we need to worry about if we don't want to fail our examinations. Bell curve, assignments, not falling asleep in class, the list goes on. Which brings me to the main point of the post today (yes, i've been beating around the bush the whole time cause i have the time to do so! XD). That being on the on the bottom of the bell curve, or the not so smart student category, is sometimes okay. In fact, we may be doing others a favor too.
Let me explain.
As students, i'm sure all of us roughly share the similar fear. The fear of being in the bottom group of the class with the not-so-good grades while most of our friends are on top of the list bragging about their awesome results. If given the chance, all of us would want to be on top of the class, being able to say, "Oh no, i'm afraid i'm not able to get an A this time" and still ending up getting an A in the end. It's true, we're just all kiasu (afraid to lose) as how Singaporeans would put it.
But do you know that being in the bottom is a good thing actually? Because if everyone is at the top and everyone is getting good results, then there will be no good results at all because everyone would be the same. There will be no basis for comparison and we would all would just be normal.
So in order to avoid a situation where there is no smart and not-so-smart people, there must be a group of individuals that must be able to sacrifice for the greater good of humanity. Come to think of it, we, the people who cannot seem to get good results, the lazy bunch, are the ones that make our friends that are smart look good. If it's not for us, there wouldn't be a top scorer list for them to be on and there wouldn't be awards or scholarships for those who scores better and higher.
Without us, life would be very dull because everyone would be on the top. And if everyone is one the top, there will be no top anymore. So we're the ones that pull the bell curve down and give meaning to those who are on the top. And no matter how hard to education system tries to tell everyone that how important it is to be on top, being in the bottom is quite important too because we help to maintain the order of the education system.
So the next time you get a bad result, don't be discouraged, but take heart! The society may look down on you but deep in your heart, you know that you're serving a noble cause. 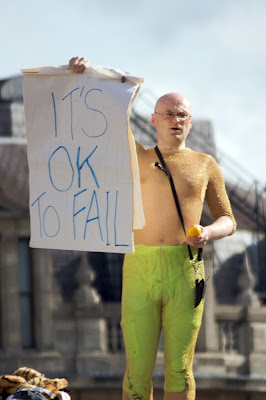 By the way, i wrote this post as a way to comfort me after my dismal exam performances. Heed the advice in this post at your own risk XD
Labels: Rantings Studies