If there's an award for the Malaysian who persevere the most under hardships, I would definitely give my vote to Namewee. Even under immense fire and criticisms, he still continues to persist in producing songs that are truly original and speaks his mind.
Take this new song from him, for example. Just recently he was hauled up by the police for producing a song that hurled abuses at Siti Inshah, the racist headmistress, in a very profane way. Because of the vulgarities he used in the video, he was not only attacked by those in the government but also from others who accused him of being a bad example for the youths nowadays.
But instead of backing down and going with the flow of the majority voices, he came out with his own way of retaliation. A song which still contains much of his unhappiness and feelings but different in a way that he censored all the vulgarities in it. A very creative way indeed to say, "In your face, you idiots!".
Which is why i admire Namewee so much. He does not go by the trends of the world, only singing songs that people wants him to sing, but instead he choose to carve out his own path in this world, no matter how much opposition that comes into his way. Even when his enemies intimidated him in every way possible, police reports, media articles, he still manages to stand tall. Again and again, he has proven to supporters and haters alike that if you believe in yourself and persevere, nothing can bring you down. His story is clearly an inspiration to us all.
And luckily, ISA has not yet come down on him as it normally would on people who voices out their displeasure against the government. And even luckier still, he's coming up with his very own album soon titled Ho Ho Yeah which means literally very good in English. I'm currently on the lookout for his album so if any of you happen to know where I can get it in Singapore, do let me know. And do support him in his work by supporting his album. It is very rare where we can find an artist like him who chooses to sing what's on his mind rather than what's on the script. 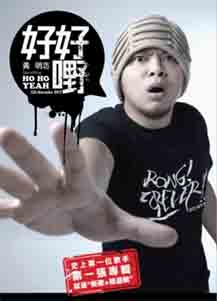 And yeah, listening to those dear ol' love songs can get quite boring too after a while. Listen to Namewee's song for a change. At least his lyrics makes sense.
Labels: Personalities Songs