Whoa, according to a new study done by some fellas over at some university at some country, sleeping longer may actually help you to lose weight! Looks like the common perception that sleeping too much is like a pig's lifestyle isn't that true anymore. 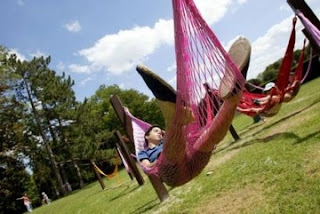 WASHINGTON (AFP) - – Dieters looking to shed more fat and feel less hungry while they do it may benefit from a few more hours in bed, according to a new study.

Dieters lost the same amount of weight whether they slept for a full night or fewer hours, but those who got more sleep lost more fat and they also felt less hungry while awake, according to the study, which appears in the October 5 issue of the Annals of Internal Medicine.

"If your goal is to lose fat, skipping sleep is like poking sticks in your bicycle wheels," said Plamen Penev, an assistant professor of medicine at the University of Chicago and the director of the study.

"Cutting back on sleep, a behavior that is ubiquitous in modern society, appears to compromise efforts to lose fat through dieting. In our study it reduced fat loss by 55 percent," Penev added.

The study, undertaken by the University of Chicago's General Clinical Resource Center, tracked 10 overweight but healthy volunteers aged 35 to 49.

The difference between the two periods was pronounced.

When the dieters got up to 8.5 hours of sleep a day, more than half of the weight they lost was fat. When they were sleeping just 5.5 hours a day, only one-fourth of the weight loss was fat with the rest being mostly muscle tissue.

And getting less sleep also made it harder to diet, as the levels of ghrelin, a hormone that triggers hunger, increased when the volunteers were sleeping fewer hours.

The strictly controlled diets available to the participants meant they had no access to additional food even when their lack of sleep made them hungrier.

But that would not be the case for real-world dieters, who could further dent their chances of shedding fat by failing to sleep enough, feeling more hungry and eating additional calories.
Penev said the message of the study was clear.

"For the first time, we have evidence that the amount of sleep makes a big difference on the results of dietary intervention," he said.

"One should not ignore the way they sleep when going on a diet. Obtaining adequate sleep may enhance the beneficial effects of a diet."

The next time my mum nags me about getting fat because i sleep too much, i would show her this article! And now whenever i feel that my waistline is expanding, all i have to do is just go and sleep! No more strenuous exercises that gives a lot of muscle aches and makes me tired all over. Just one plain simple sleep.
Or is it so?

From what i understand from the article, sleep alone would not help you lose weight. You need to be dieting, yes dieting, at the same time to be able to lose the weight you want. Which means that you'll still get fat if you decide to sleep straight after snacking on two burgers and downing one large cup of coke. And exercise is still necessary to cut weight. Unless if you decide to go on a diet, of course.

So much for giving us hope. Ceh.
Labels: Life Rantings