I'm no sports fan. Honestly. If you ask me what football club i support, instead of the normal Liverpool, Chelsea, Man Utd or Arsenal shout followed by a rendition of the club song, you'll receive a blank face from me.
But i'm about to change my mind. Especially after watching this.
People like to come up with all kinds of sports, don't you think? I heard that there's this school that actually plays Quidditch in the USA. Instead of flying brooms, they have running brooms instead. Which means you have to run around passing the ball with the broom stuck between your legs. Not a very recommendable sport for us guys. 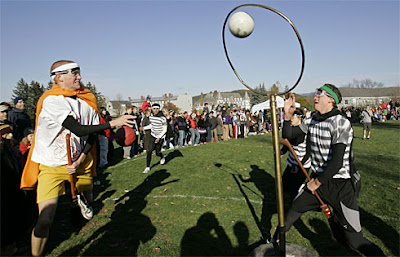 And there's the wife carrying sport. Tough love really do mean something for these husbands.
Not forgetting the cheese chasing sport where to winner gets a free cheese for winning. 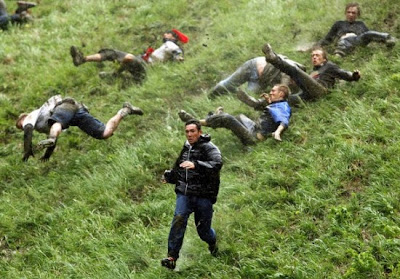 Not for the lactose intolerant.
As weird as these sports may be, there's still no push for me to actually take interest in it. But lingerie football, now that's a whole new story on a whole new level. 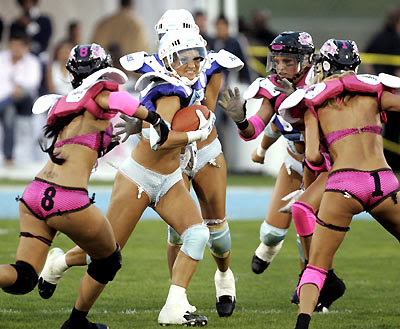 And, despite what you may think, the sport is actually quite serious in the US with its own National League and teams from various states. Heck, it's even comparable to the NBA with weekly matches shown on national TV. Team names include Dallas Desire, Los Angeles Temptation and San Diego Seduction.
Now that's what i call a sport. All that is left to do is find myself a team to support and start tuning into the weekly matches shown online.

What?
At least i'm being a normal guy satisfying my desire to see the opposite sex dress scantily in some high contact sport. It's much better than watching testosterone filled males sweating it out chasing some ball. And that for me, is not normal.
Labels: News World