In psychology, a Fundamental Attribution Error (FAE) is an error that you make when you wrongly attribute someone's behavior directly with their internal attributes such as personality or attitude. For example assuming that the person that came late for a meeting with you is lazy and irresponsible when in fact his car was rammed by a lorry that was speeding. Or assuming that the girl who had pre-marital sex with her boyfriend has no morals and is a slut when in fact she's doing it because the guy forced her too. 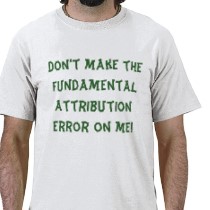 In short, FAE roughly means that you should not simply judge people when they did something wrong, no matter how serious the action, and try to look at the situation as neutral as you can.
And as psychology students, although again and again we are reminded to not commit FAE due to its faulty reasoning, our human judgment are shaped in such a way that we will often automatically make unconscious judgment about other people without even realizing it. Like what i did in my last post for example. Remember the story of the underwear lying in the toilet? Click here if you don't. 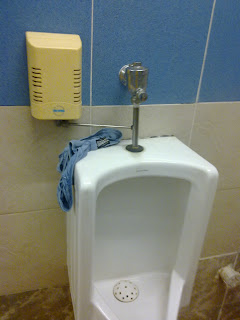 Well, apparently my assumption that the guy who left the underwear on the toilet is an irresponsible bugger who does not deserve the title of an university student turns out to be a fundamental attribution error after all.
The reason was because the owner of the underwear surprisingly reads my blog and approached me just a few hours earlier to explain the case of the underwear on the urinal. And the explanation given was nowhere near the expected, "Oh i was lazy and i did not care about disposing the underwear properly so i decided to left it in the toilet." Rather it was about how he lost that underwear of his, probably dropped it in the toilet, and never noticed it on the urinal until he saw that blog post of mine. And he happened to be a friend. Which meant that i just shot my friend publicly in a blog.
I guess i have to think twice next time when it comes to judging people. Be it the underwear in the toilet or why people do some stupid actions. There might be a host of other explanations that does not necessarily include faults with the person who performed the action. Perhaps there might have been situational factors that we're not aware of. And by directly making conclusions, we might make the fundamental attribution error and end up looking like a fool when the real reason comes up.
Looks like i still have a bit of revision to be done.
Labels: Life Psychology