Just yesterday, the university administration announced to us that there have been a spread in influenza among students in our university. According to preliminary studies, more than hundreds of students were infected with the disease and the numbers were expected  to climb in the coming weeks. In an effort to curb the infection, the university has issued an order for all students to stay put and not attend and classes. Physically, at least.
And thus the E-Learning week was born. The above situation is merely a hypothetical one, but in light of the recent bird flu threat and other factors that may warrant a need to stay indoors, NUS has decided to come up this kind of exercise that simulates a real threat.
This week is the Arts students' turn to experience learning the E way. For one whole week, we are required to still attend class and tutorials even though there's this deadly virus spreading out there. Like they say, "We ain't gonna let one tiny organism obstruct our path to achieve greater knowledge."
Or so they say. I have just finished my first tutorial class of the week where we have to discuss the topic of the week online in a chat room. It's really like the IRC chats except that you can't get to talk whatever you like and it's a very serious tone with no smileys allowed. 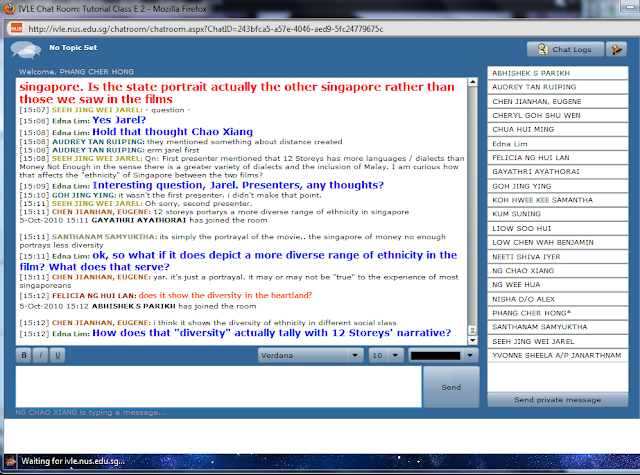 Twenty minutes into the discussion and i already feel like that i might as well have landed in Mars discussion about the next step that should be taken in furthering space exploration. And that was not a very good example.
Forty minutes and i think i should start saying typing something to make myself not look as if that i was "actively" participating in the conversation rather than staring blankly onto the screen trying to decipher the language that was being spoken in the chat room.
Fifty minutes have passed and i'm now very tempted to say something really random in the conversation. 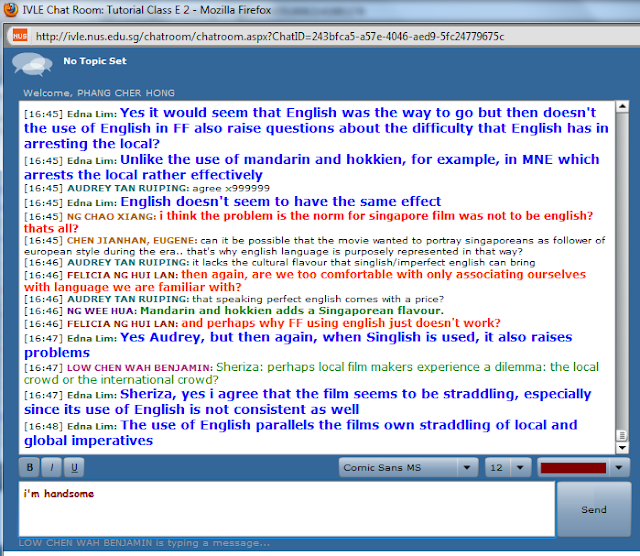 Eighty minutes and i'm already in Facebook looking at friend's status updates and thinking about what am i going to have for dinner tonight. I'm sure the people at the chat room will not miss me since i have only said in total three or four sentence since the start  of the tutorial.
One hundred and twenty minutes and the tutorial has officially ended! 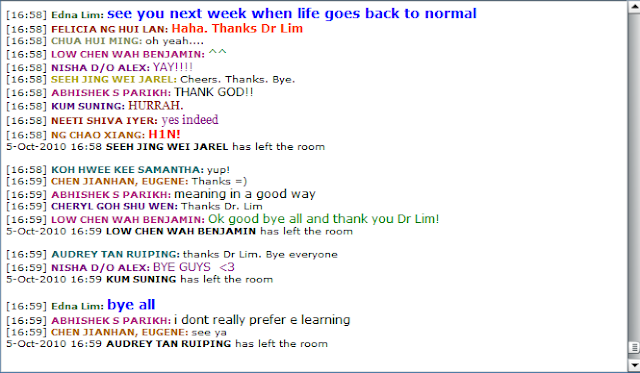 Boy, i sure do hope the virus decides to leave fast though. Judging by how my first E-Learning tutorial went, i think i might be scoring a lot of 0s for my participation marks. Perhaps i should have just gone ahead with saying "I'm handsome" when i felt like it. At least it shows that i've participated.
Labels: NUS Studies