Forever Fever (That's The Way I Like It ) - For My Dad

Hey dad, i know you read my posts. And i know how much you love those retro songs that you so used to play over and over again in the car, in grandpa's house which is why i thought you would love this film, Forever Fever (That's The Way I Like It).
It's a Singaporean film with the storyline of how "Kung Fu meets disco in Singapore. Hock is a grocery clerk longing for a motorbike. He lives with his parents and sister; they idolize his younger brother, Beng, a medical student calling himself Leslie. Hock loves Bruce Lee; he works out and imitates his moves. When Hock sees a cheesy local version of "Saturday Night Fever," he gets the disco bug, taking his pal Mei to nightly lessons in hopes of winning a contest and buying the bike. He's blind to Mei's falling in love with him, and, at the last minute asks another woman to be his partner in the contest. Meanwhile, Beng reveals a personal secret to his family and a crisis ensues. Hock, Beng, Mei and her rival: it's Night Fever." 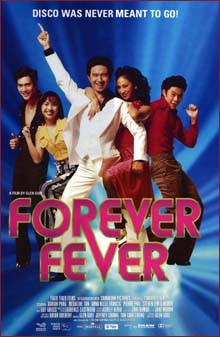 The story is set during the John Travolta's Saturday Night Fever hype, about the 1970s or 60s i'm not sure, but it showcases the songs from the era like "Staying Alive '98", "Kung Fu Fighting" and "How Deep Is Your Love" which i'm so used to hearing when i was young. Aside from the retro songs, the film also featured the signature clothes from the era like the tight pants and V neck shirt that give it an even more authentic feel. And i'm sure you'll like the witty storyline and professional cinematography used in the movie.
I've included the link from Youtube so you can watch the movie. It's just Part 1 i've included, but if you like it, you can go to Youtube for the part 2 or click directly on the part 2 link when the video ends. I know the internet from our house is quite slow and it will take time to load the movie but i'm sure that you'll like it very much and it's worth the effort.
This movie was produced in 1998 and featured a professional Australian crew to give it a more polished and refined touch. The movie was so good that it went overseas, becoming one of Singapore's first made film that has such a huge commercial success. In fact, it's director, Glen Goei, became the first Singaporean to be ever given a 3-picture deal by Miramax.
The amount of recognition that is given to this movie is alone to show that this is indeed one good movie. Even for someone like me who is not born during the Saturday Night Fever hype, i find the movie quite enjoyable. Two thumbs up for the movie and a personal rating of 9/10.
Labels: Movies