Anything goes as long as it is safe sex?

The Delhi Commonwealth Games seems to be making headlines for all the wrong reasons recently. Just after the poor condition of the athletes village sparked worldwide attention, we are then greeted with the news of how safe sex is promoted in the athletes village. With a twist, that is.
According to various news reports that can be found around the web if you Googled "safe sex" and "Commonwealth Games Delhi" (i got mine from http://nz.sports.yahoo.com/commonwealth-games/news/article/-/8091369/condoms-clog-athlete-toilets-report/), Indian plumbers have been having a hard time keeping toilets clog free due to the enormous number of condoms that were flushed down the toilet. And by enormous i mean thousands of them.

Apparently aside from representing their country in sports, athletes also engage in some cross-national co-curricular activity in their free time. Giving free condoms in the thousands is not something new as this was also done during the Beijing Olympics, where 10 000 free condoms were given out to athletes. Hearing this sure makes me wanna be an athlete myself. How many would have the chance of experiencing cross-national love education, right?
Anyway, the organizers were so thrilled that the condoms that they have given out was actually being used until the Commonwealth Games Federation president, Mike Fernell, can manage to say that "...we all know that promoting safe sex is a very responsible thing to do, and if that is being used, then I think the athletes are being responsible."
Am i missing something here?
If i'm not mistaken, from a young age we're being brought up to think that public littering is wrong. Throwing rubbish anywhere we like, for example the toilet, is a irresponsible behavior that causes problem to both the environment and others. Rubbishes, as i know, goes only to one place and that is the rubbish bin.
But if i were to follow what the Mike fella up there say, as long as i'm practicing safe sex, anything is okay? So much so that i can forsake being responsible in disposing my own waste as long as there is condoms involved? Does that mean i can go in to a convenience store, take the condoms and get out without paying and not get charged for theft? I'm trying to practice safe sex, anyway, but i don't have the money to buy condoms. Am i being responsible that way?
If i were to make a guess, that poor chap seems to be suffering from some cognitive dissonance by trying to rationalize the athletes irresponsible behavior, which is throwing things into the wrong places, by giving a lame reason such as "At least they're being responsible when they're having sex".
One thing is certain though, the plumbers in charge of cleaning the toilets clogged with condoms will not be too fond of Mike Fernell. 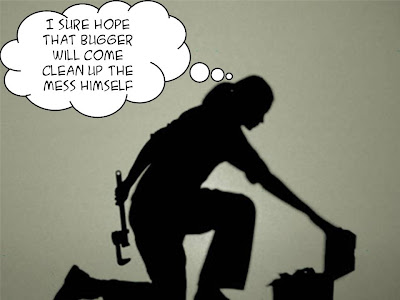 As for me, i'm selecting the sport which i want to take part in for the next Olympics.
Labels: News Rantings Talk Cock