And the stupid assignment award goes to... 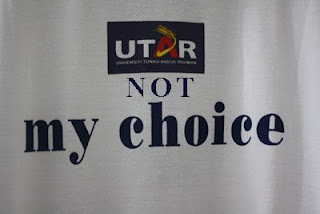 Not because the quality there sucks or what, i think it's way better compared to some of our local universities, it's just some lecturers there give stupid assignments. Okay, perhaps it's not UTAR's fault. Many lecturers i know give stupid assignments too but lets get back to the story.
For the past few days, i have been flooded with requests from friends to ask me share a MTV video that they have made for a subject they are taking. And by flooded i mean Facebook wall posts, MSN nudges and messages all round asking you to help promote the video. Most of the requests are bordering on sentences like, "Please help to share this video and tell your friends to share it too. Please. It is very important to me. Thanks and please."
I don't know bout you guys, but i usually get annoyed by requests like this. Not that i do not want to help, but on my opinion, i think that if what you have produced is good, be it a video, a blog post or anything at all, people will naturally want to share it without you asking. You certainly don't see Taylor Swift going around asking people to listen to her sing or Xiaxue begging you to go the her blog.
Of course, as friends, i would of course share it if you asked me to. What are friends for anyway? It's usually the people whom you do not know and only approaches you when they need help that annoys me.
So when this person approached me in Facebook for the Nth time asking me to share the video he made, out of curiosity i asked him why is it so important for me to share the video and why he is so desperate to promote it.
"Because the lecturer are grading us based on the views we get on Youtube, that's why."
Grades based on the views you get on Youtube? So as a lecturer you're asking your students to come up with a viral MTV video? Isn't that a bit too much?
And according to my friend, the video must be a parody based on a well known MTV video that is already on Youtube. As far as i know, a good parody is hard to come by. There are a lots of parodies of almost every popular song there is and your video must really stand out to go viral. Not an easy task for students. So what can you to to get the hits up? Friends that is.
Besides, a good video takes time to travel. And for first time videographers, you do not have a fan base to disseminate your video. Ultimately, the person who has the most friends (ie most popular) will most probably the the highest hit on the video. So you're basically graded on how popular you are. Or how desperate you are in spreading the video, that is.
Oh well, since complaining about the assignment to the lecturer does not help much, i guess i should just help them share the video here.
I still think it's a stupid assignment though.
Labels: Parody Rantings Studies Videos