In the DSM IV, a manual in which you used to diagnose psychological/psychiatric conditions, there are tons of different disorders you can fin. Ranging from depression to ADHD to extreme shyness, the kinds of disorders that you can find in the DSM IV is a proof that we humans can be very creative when it comes to labeling all this sorts of diseases. Heck, the DSM IV is even thicker than my textbooks, with over 886 pages and almost 300 over disorders inside.

However, as creative as the writers of the DSM could get, they still left out three major disorders that i seem to be suffering this holiday. And being a psychology student, it is of utmost importance that i share with the world this three disorders that could do much good if included into the DSM IV so others would not have to suffer like me.
The first one would be the Textbook Avoidance Disorder (TAD). 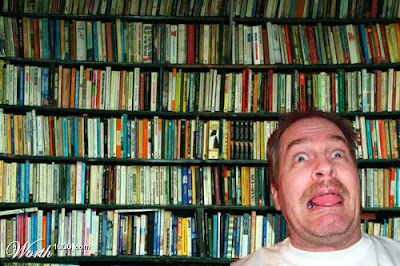 A completely different disorder if compared to the fear of books, Bibliophobia, this disorder is characterized by extreme avoidance of textbook particularly by students. Even if the textbook is right in front of them, even if a major exam is approaching, people suffering from this disease seems to be unable to take up a textbook and read no matter how much their brain is trying to get them to. To this group of people, the textbook is treated as if it was invisible or filled with things that you would not want to go close to.
A theory suggests that TAD is perhaps responsible for the huge amount of fails in major exams that is seen every year. A possible solution to this problem does not include getting the patients to like the textbooks but instead burning all the textbooks in the world so that they would have nothing to fear anymore.
A second possible disorder that i'm suggesting to be included into the DSM would be a new addition to addictive disorders, called Facebook Addiction Disorder (FAD).
Sharing the same characteristics of other addictive disorders, symptoms of FAD includes spending excessive time on Facebook chatting, playing games, updating status about how bored you are every three minutes and doing Facebook related activities until it impairs your normal day to day functioning. People suffering from FAD have trouble leaving the computer and performing day to day interaction with others. And like all people suffering from addiction, FAD patients see no wrong in over-immersing themselves in Facebook, giving reasons like "It's to catch up with my long lost friends", "Keeping myself updated with friends' news (more like gossiping)" and "I'm just de-stressing. The traditional treatment for disorders such as FAD, which includes gradual weaning off from the substance of abuse, in this  case Facebook (meaning spending less and less time with Facebook to eliminate the addiction) or the cognitive behavioral therapy, would not work because in our world today, people cannot live without Facebook. A proposed treatment would be to let the Facebook addicts to play Facebook until they get bored or to pray that the Facebook server would just crash one day.
The final disorder that i'm suggesting for today would be the Talk Cock Disorder (TCD). 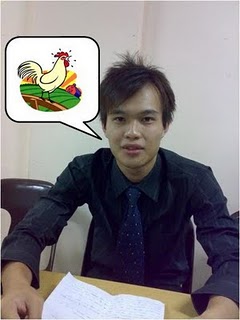 A completely new disorder on its own, TCD is characterized by excessive nonsensical talking exhibited by patients. Sharing somewhat similar characteristics as exhibited by schizophrenia patients when talking, people with TCD tends to talk about lots of thing without rationality, concrete evidence and logic. They could talk about cows flying over the moon, Osama shaving his beard or Obama is really the shaved-beard version of Osama just for the sake of saying it and coming up with good entertainment.
A classic example of TCD could be seen in this blog, where the author tries to come up with new disorders and tries to prescribe all sort of nonsensical treatments to the disorders that he just thought up of the blue.
Standard treatment of TCD includes taking the Cock Talker away from the places where he can lapse into a bout of cock talking and in this case, would be taking Lukey away from his blog so he could go read his textbooks, stop Facebook-ing and no more TCD in his blog.
Labels: Talk Cock