Did you hear about the latest gossip in town? Apparently the famous England footballer, Sir Wayne Rooney has decided to join the ranks of celebrities who cannot stay loyal to their spouses. The scandal goes that Mr Rooney allegedly had sex with a prostitute when his wife Coleen was pregnant with his son, Kai. Like all the girls who have an affair with famous people, the prostitute, Jennifer Thompson, couldn't keep her mouth shut (even though getting paid for almost £1,200 per session) and wanted to tell the whole the story world in hopes of getting famous. Poor Coleen. I wonder how much more sluttier could Jennifer get?
Which is why i think it's hard to find real celebrity couples who are really compatible. You have all these unfaithful lusty guys walking around always waiting to pounce on unsuspecting girls for cheap sex whenever they have the chance. Or celebrities that have Divorce listed as their second hobby. That would definitely not make compatible couples. My definition of compatible celebrity couples must be a couple that has never been separated before. It was their first marriage and they're still going strong at it. What's the use of the vow, "Til Death Do Us Part" if you're gonna divorce every two years anyway?
If i were too vote for the most compatible celebrity couple, i think my vote will go to David Beckham and Victoria Beckham.
David Beckham's story of how he chased Victoria, who was one of the Spice Girls at that time, never fails to amaze me. It tells of a shy footballer who at the first meeting with her, was at a lost of words and did not know what to say. It was an awkward situation and the shy footballer thought that all was lost thanks to his anxiousness. Not wanting to lose the girl of his life, he arranged for a second meeting to have another shot at happiness. Like all romantic love stories, the shy guy eventually prevails and discovered that the girl had liked him too. Soon, the relationship involved watching movie, driving around together and expensive phone bills.
They eventually got married in 1999 and celebrated their 10th year anniversary happily last year (2009). Sure the marriage might not have been a smooth sailing one, with allegations of David having an affair with his personal assistant, but which relationship is without obstacles. The important thing is that David took the effort to make things right and like he said, "The simple truth is that I am very happily married, have a wonderful wife and two very special kids." When asked about the affair, Victoria Beckham couldn't agree more, "I'm not going to lie. It was a really tough time. David and I got through it together. No one said marriage was going to be easy. Yes, there have been bumps along the road. But now we've come out stronger and happier. It's even better now than when we were first married. After all these years, we can just come home and have a laugh."
Should there be any other reasons for David and Victoria Beckham not to be the most compatible celebrity couple? They're down to earth, don't openly flaunt their relationship in the public (like how Bradgelina does it) and have problems just like us.

I think one of the reasons why David and Victoria make such a great couple is how they share the same viewpoints regarding marriage and family. It is not easy for celebrities to stay married for 10 years, you know. And like David and Victoria, it is important for couples to share the same thinking in order to have a fruitful relationship. But how can we know if our other half shares the same values as us? Especially if we're busy with our studies and jobs all the time?
That's where eSynchrony comes in! 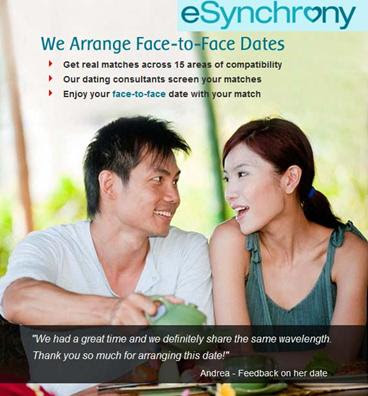 eSynchrony makes matchmaking what it really is. Rather than putting random people together, their focus is on having like minded people date each other. With across 15 areas of compatibility, you can rest assured that eSynchrony will provide you with the perfect one. eSynchrony is trusted around Asia and has been featured in Channel News Asia and the New Straits Time before. If you're happen to be a busy person looking for your Mr(s) right but cannot seem to find time for it, try out eSynchrony! With a good track record and advanced pairing system, you're bound to get the relationship you want, just like David and Victoria Beckham. Check out their site at http://www.esynchrony.com/index.php
Who knows, with the help of eSynchrony, you might even beat David and Victoria Beckham on the compatibility scale!
Labels: Competition