Note: My senior Joshua actually asked me to write this article, so oh well, since it would be a great avenue to brush up some of my writing skills before school starts, i decided to give it a try. Do pardon me if you think that this article is not good enough, as my English standard is nowhere near a grade A standard. At least that's what all my lecturers for the past two semesters thought when marking my papers. So yeah, please don't expect too much :p
August 6th, 2010 was a day of reckoning for many in the National University of Singapore (NUS).
It was Rag Day. One of the biggest annual events in NUS that marks the beginning of a new academic year for some but for most it is an event in which halls of residences and faculties battle it out to produce the best float and performance in hopes of securing the title of Rag Champion. 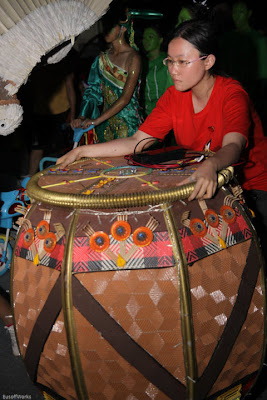 I, luckily, had the honor of being among the people performing for rag. As i stood there on the field that day, as dancer for Eusoff Hall waiting for our turn to be on stage, i could not help but reflect on the past three months activities that led me to where am i that day.
Truth to be told, I was never a good dancer to start with. Prior to signing up as rag dancer, i failed the auditions for both Eusoff Dance Corps and also Eusoff's Dance Production. The reason why i did not gave up and joined rag dance was because i loved dancing and more importantly, we did not have to audition for rag dance. Little did i know at that time about how far this journey would take me as i wrote my name on the sign up sheet. 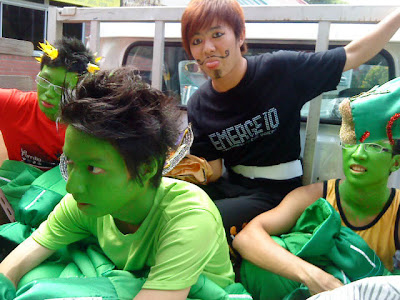 Dancing was never easy. In fact, nothing is easy if you want  to be good at it. We had our own share of problems as rag dancers in during our preparation. We never had any full dress rehearsals until the last week of the rag dance and our costumes never really got completed even on rag day itself. There were rumors about how bad is the preparation of the float is going and how this year we may not able to achieve anything at all.

We doubted alright. We even thought of giving up. But Wei Jie, one of the best choreographers Eusoff will ever come to know, made us go on. He said that even if people throw shit at us, we will still be able to take it because we are Eusoffians. And one of the most important messages he imparted on us is the the importance of not wanting to win but to have a good time instead. Winning, of course, is important but more importantly he wanted us to put up a good show and enjoy ourselves on stage that night. And that spirit that he left on us, was perhaps the best strength that we brought unto the stage that night.

Eusoff's rag performance was never intended to be a show of complicated dance moves, people being tossed in the air or complicated machinery on the float. Instead, we settled on a dance and a float that would ensure the essence of the plot flows freely. When we went up on the stage that day, as raggers and as dancers, all we had on our mind was to give the audience a wonderful time. We all wanted the audience to feel and understand the story that we wanted to portray. And alive did our story became. 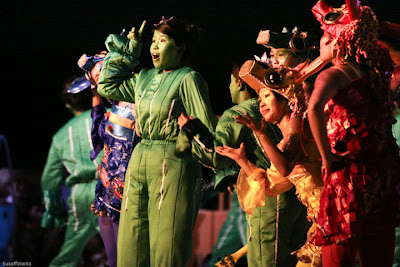 The smiles on the pinatas faces when they came alive, the funky looking cacti dance and also the grace portrayed by the dancers complimented each other to bring out the best from our performance. Though there were mistakes made here and there such as the music coming on too early, the poster going missing and Nicole having a bad fall, the mistakes got turned into one of our strengths as it bore witness to some of the best impromptu performances ever shown. Scenes like the crowd and car traveling scene helped to let the audience understand our performance better. Our choreographer's emphasis on keeping the story flowing through all our actions never left our head during the whole time we were on the stage.

When the stunt girls went up, when the all of us gave the final pose to the end of the music, we knew deep down that Eusoff gave its best that night. It was without question that hearing the cheers from the crowd. All that was left now was up to the judges to decide. 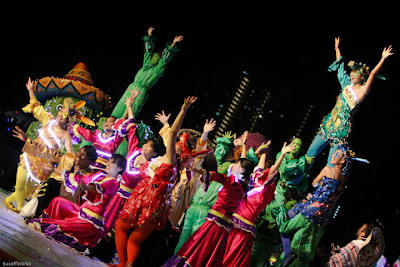 The Olympic Torch was brought in after that, marking the start of YOG. The president made his leave and finally, it was results time. As all of us stood together, hand in hand that night, our heart thumped nervously as we waited for the results. The first award, the Most Environmentally Friendly Float, was an award we had not anticipated. But we celebrated nonetheless. One award was better than none, after all.

Then came the turn for the second award, the Best Float Design. We managed to bag the award last year thanks to the intricate detailing we used on our submarine and this year was no different. Each and every layer on the train were decorated with hundreds of detailing that consists of a few items pasted together. The Eagle for example, consisted of thousands of half burned matchsticks glued together with the feathers. It was without doubt that when the emcee called out the name of the winner, we have managed to retain the title. 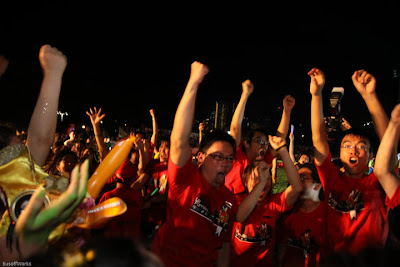 Winning one or two awards might have been normal. Three was phenomenal. We had absolute trust in Saira and the rest of the static display dancers to bring out the message to the judges for the static display section. And deliver they did. As the emcee announced the winner for the third award, all of us jumped for joy and shouted ourselves hoarse. We knew that all our hard work during the last three months have not gone unrewarded. Tears of joy were shed and hugs were exchanged. But there was still one award left that was important to us, the Best Rag Performance.

KE VII managed to won the award last year and this year they have the same high chance of winning again. We knew that it will be a tough competition. But we also knew that we have a fighting chance. As the name of the award was announced, we held our breath and crossed our fingers.

"Eusoff Hall!". It was unmistakable, it was certain. We won the award! We actually won the Best Rag Performance! All of the hard work we have put in, the countless sleepless nights, the four hour rag dance practice everyday, the missed outings with friends, all paid off during that moment. Even Wei Jie and Jie Lin, our two dance choreographers, couldn't hold it in much longer. They went through a lot more than the rest of us dancers and it is understandable that this award would have meant a lot for them. I'm so glad that we did not disappoint them. 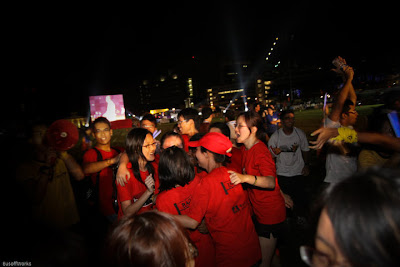 As the award was passed to us, many of us jumped for joy. We jumped like there's no tomorrow. We shouted. We cried. We thumped our fists to the air. We celebrated. We let all our feelings out. No words could describe how it felt that night. It was like having all your dreams come true in one shot. Rag could not have been sweeter than that moment. It was during then when each and every one of us felt that we were one as part of the bigger Eusoff family. We're there not as dancers, not as raggers, not as freshies but we were all Eusoffians. We were there as a family.

We all trusted and believed that we could make it. We persevered. As we look at each other, our fellow raggers, fellow dancers and fellow Eusoffians, tears turned into smiles. Three months our hard work have not gone wasted. In the end, everything was worth it. Four out of five awards was our testimony.
We can, in fact, achieve anything if we aimed for the sky. 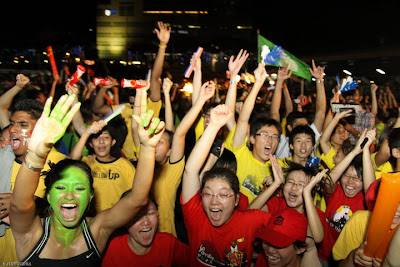 Some from the other halls may question the decision of the judges themselves, as evident from what is seen on the internet. Like how one particular hall put it, "a particularly Dazzling Float might have so pained the eyes of the judges that they didn’t notice the following performances". I personally think that every hall deserve to win in their very own right judging from all the performances and floats shown. KE VII for their splendid performance, Sheares for their colorful costumes, KR for their spirited cheer at the end of their dance and Temasek for their special float design. I bet the judges must have had a hard time choosing a winner from all these wonderful performances put up by all the halls. Why the judges chose Eusoff, we'll never know for sure. I'm certain that they have their own reasons and i'm also pretty certain that they must have experiences of judging before, and it is very likely that many of them were judges for the last year's Rag too. So why can't we trust their decision? If you were to doubt them now, why did you not doubt them the year before? Why only now when your hall did not win?

No matter what others might think, we knew that we put on one of our best performances that night. To top it all off, the recognition we got came from not one, not two but four awards. Four out five awards, that is. And the icing on the cake is definitely the Chingay performance offer. In the end, we achieved all that we set out to achieve. On top of all that, the journey that we all went through together when the first design was drawn, the first wood was cut and the first warm up we had was one of the best journey we have ever taken. The friends we made, the memories we shared, could only be found in Eusoff Rag. Undeniably, Eusoff Rag 2010/11 will be one of the most awesome experience that we all might ever have. And it will not be the last. 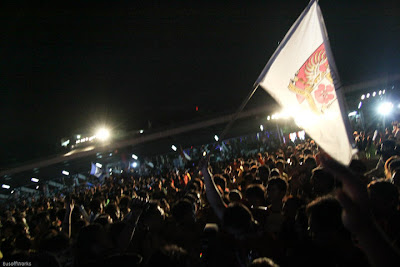