Flag. A word normally associated with patriotism, a sense of belonging or just some symbols drawn on a random piece of flag. However, we all know that people interpret words differently depending on their understanding of the word use. Notebook, for example, could mean a stack of paper where you scribble your stuff or a electronic device very similar to the laptop depending on how you interpret it.
Anyways, back to the main point. Flag for NUS students means much more other than patriotism and random symbols, it also means waking up at an impossible time, 4 am that is, and spending the rest of the day with a fixed smile while holding a tin can out hoping that some kind soul wouldn't mind dropping some extra coins into it for the purpose of charity. Not to mention getting a sore leg from a full day of standing and also extra bags under your eye due to the early morning wake up.
I'm not complaining. Really. 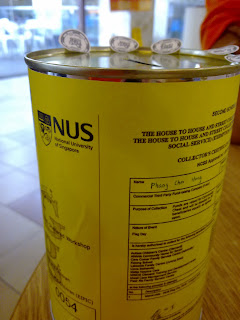 Asking for donations from random strangers is truly a great experience. It's the only time when you get to experience the feelings of being as if you're inflicted with some deadly disease like SARS or bird flu. From 100 meters away when people see you, they will avoid all eye contact with you in hopes that you did not notice them. As they're getting closer, they will start to perform all sorts of impressive maneuvers only seen in Hong Kong kungfu movies to dodge you. It's like you're going to suck them dry of their precious money if they get too close to you. Heck, even Bruce Lee's moves get outdone easily by the monkey-dodging-stay-away-from-my-money kungfu style that these people employ. 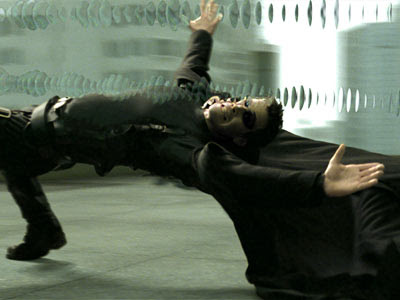 "Oh yes, i'm gonna dodge you attempts to ask money from me like the Matrix!"
I also got to meet also sorts of funny people while on my Flag duty. On the sight of me holding the tin can, people who can go deaf and dumb and start making all sorts of weird signs to indicate that they do not have the money. I certainly did not know a small tin can had such power to mute talking people. 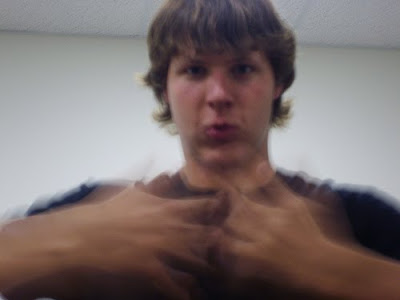 The hand signs were so fast i couldn't decide if they're telling me that they have no money or they want to wipe their windows real fast later
The most idiotic funniest people are those who see you from far, makes eye contact, smiles at you and reaches their hand into their handbag. Just when you thought that this person is a kind person who wants to donate to you, he/she suddenly takes out a handphone from the bag and starts speaking into it before quickly walking away. I swear if i had a hand grenade at the moment, confirm the place go BOOMZ already. 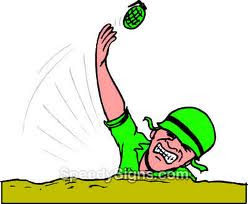 "Fire in da hole, ya SOBs!!"
Funny people aside, i also learned quite a lot of lessons from a day of flagging. The most important being the famous proverb, "Don't judge a book by it's cover". I thought that the people wearing formal wear going to office are the most likely to donate as they're the ones earning money. Truth is, the richer the person look, the less likely the person is to dig into their precious wallets/purses to spare some coins. the people that mostly donated to me today was those i never expected them to donate, one being the schoolchildren and the other being old uncles and aunties. Like what my friend said, it's like poor donating to the poor. Funny right?
Anyone mind explaining ? Is it me or is just humanity insanely amusing sometimes?
Before i close this post, i would still like to say that Flag rocks. Except the 4 am part, that is.
Labels: Eusoff Hall Life Updates NUS