There are many things that i do not like in this world. I have one long list full of them. And somewhere sitting on the top of the list would be the movie Twilight. You know, the movie that has sparked off one of the most intense debate ever seen among the girls in history; "Is Jacob Black or Edward Cullen hotter?". 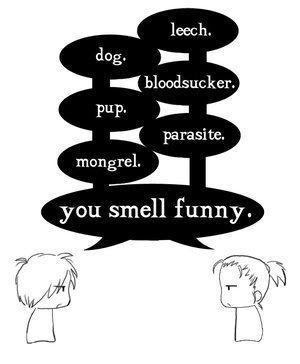 Edward vs Jacob
Til today, i still do not understand the big deal regarding the movie. The movie boast of no great cinematic, a fairly predictable plot and a guy who emo all the time. And with the installment, Eclipse, with no sign of the Twilight excitement dying out, i think most anti-Twilight guys are pulling their hair in frustration every time their girlfriends request to watch Twilight with their boyfriend for the 10th time in the hope that some of Edward Cullen's emo-ness or Jacob Black's sexy body might rub off on their boyfriend.

But fear not, my fellow anti-Twilight brethren! It seems that it is not only us guys who are fed up with this whole Twilight thing too. Some movie makers are feeling the exact same way and to voice out their thoughts regarding this Twilight thing, the have used one of the best way ever to fight back! A excellent Twilight parody called Vampires Suck!

The next time your girlfriend ask you to watch Twilight for the 10th time, you'll know how to fight back!