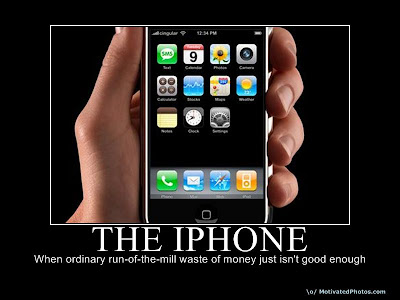 I remember the day when iPhone was first released by Apple, there was this hype going on about how good this phone can be, how awesome is the phone bla bla bla. Most of the people i know were going crazy about it. Soon, it wasn't really surprising that everyone else was holding an iPhone or wanting to hold one, and the whole thing seem to turn into some sort of Apple iPhone worship thingy.

I for one, happen to be in the minority who is not so keen about iPhone. I mean sure, you have a lot of customizable apps, great interface, those sort of stuff. But it's still not enough to compel me to go running out to have one iPhone. Maybe my mind is just to simple to grasp the greatness of this phone. I'm not angry at the phone, it's just that sometimes how people try to show off their iPhone that annoys me.
Ok, enough talking from me! What's said above is purely my opinion. I'm no tech geek who is well versed in these phone matters so please don't start shooting me first dear iPhone users. One of my friend recently posted this video in Facebook and i thought it was dang funny. Caution! It's only for people who are not iPhone users and are not planning to get one. You've been warned!
Did some research and found out that after initial reviews, android phones can be better than iPhones in a variety of ways. One like this:

I think i'm gonna get myself an Android too!
Labels: Rantings Techie Stuff