Today, my day began with numerous attempts by my handphone's alarm to wake me up at 5.00 am in the morning. Although i only had a total of less than three hours of sleep and was in no good condition to wake up, my handphone did not spare any mercy on me and kept repeating its annoying beep. I know it was trying to do it's job, but sometimes i seriously do hope that my phone would have some sympathy on me and let me go back to my sleep. Sadly, my phone was very cold hearted when it comes to performing its duty. 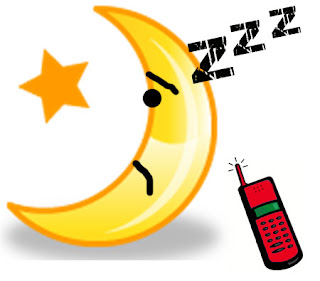 After finally unable to ignore that cold hearted phone's incessant ringing, i had no choice but to pull myself up off the bed. To make matters worse other than having to wake up at such an impossible time after so few hours of sleep, it was raining heavily outside. Along with that rain, my room was feeling all cool and comfortable. Normally, that would have meant a few extra minutes, if not hours, of ZzZz for me. But as i've already promised my friends in MSL (Malaysian Student League) that i will wake up early and help them with the UFO5 (University Freshmen Orientation 5) preparation at the Sentosa Beach, i have no choice but to put all thoughts of extra ZzZz away. How i wish that my phone had stopped ringing earlier somehow. 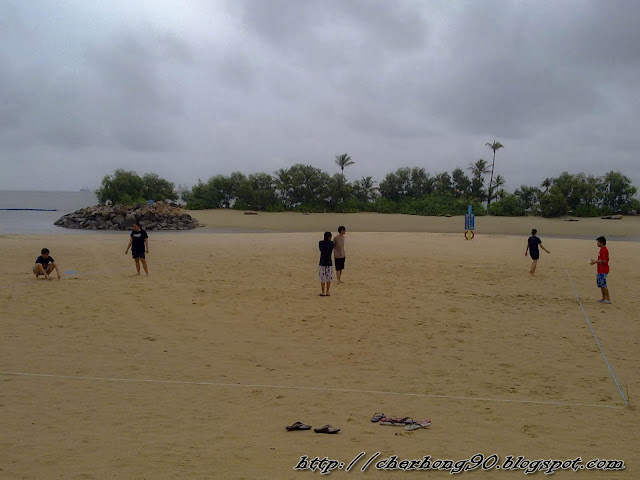 Every year, the MSL from NUS will organize a series of activities to help the new Malaysian freshmen to adapt to the life in Singapore. As new arrivals in a foreign country, undoubtedly most of the freshmen will have troubles blending into a culture that is new to them. The UFO, therefore, is organized as part of an orientation program for the freshmen to find friends and adapt. And among all the activities within the UFO, the Sentosa Beach outing is part of the MSL custom and must do activity. It helps the freshmen to bond among their peers and to let them have some fun before the real nightmare in university starts. 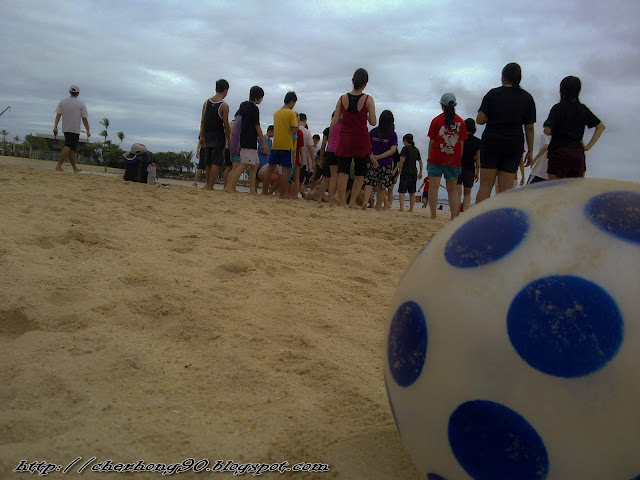 Besides serving as a place to bond and relax, the Sentosa outing also serves as an unofficial ritual for every MSL member. To become a fully fledged member in MSL, you must at least attend the Sentosa outing once to get the feel of what MSL is all about. This is due to the fact that aside of sharing lots of fun experiences with fellow MSL members, there are also a few activities that you can only do in Sentosa. Activities that you will find most MSL members talking about them for a quite some time after the orientation. Activities like:- 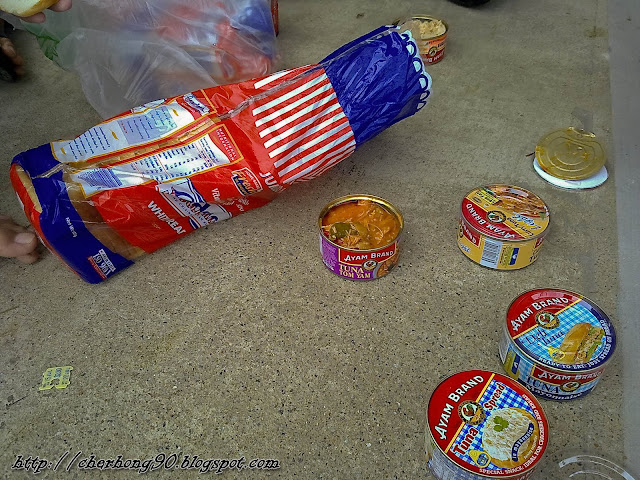 Having a lunch that only consists of bread and tuna spread 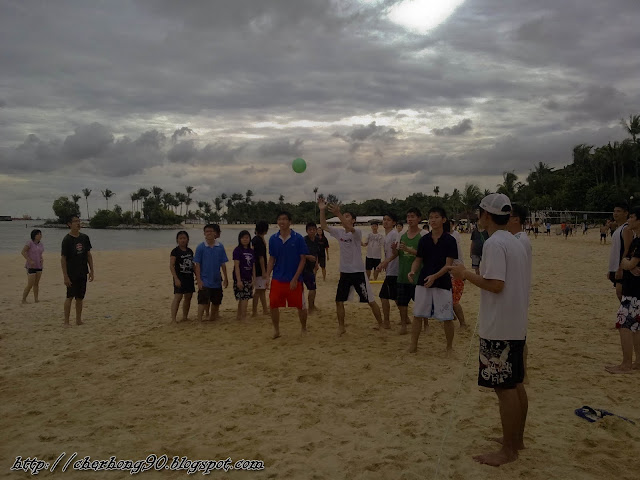 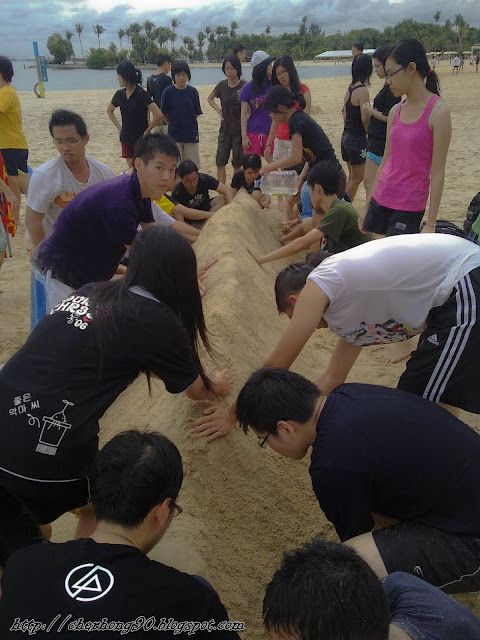 Building a sandcastle that is to be used as a shield for war games... 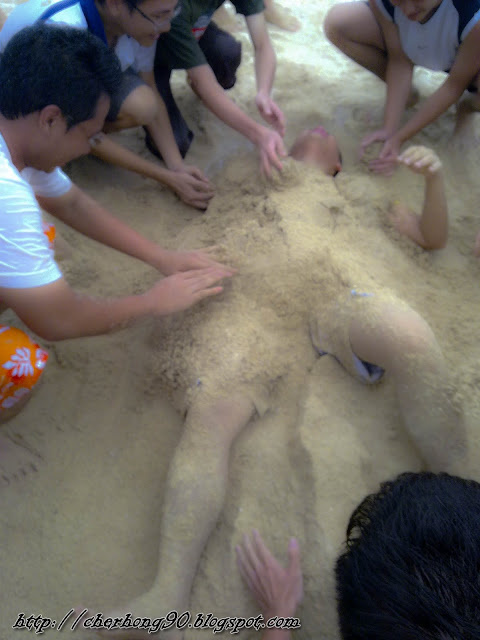 ... and also building a sandcastle made out of Kim Wong's body 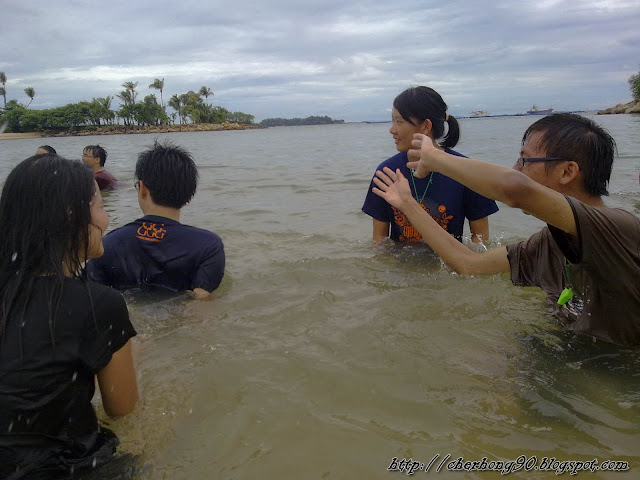 Plus having fun in the sea water... 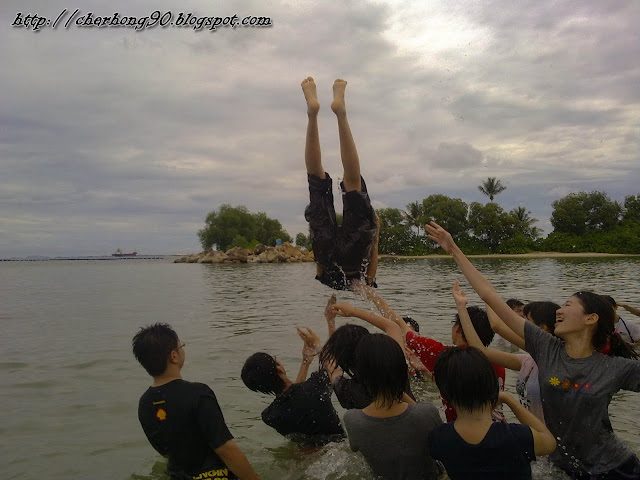 By mentioning about having fun in the see water, i'm talking about flipping your fellow MSL mates into the sea water whenever you have the chance! 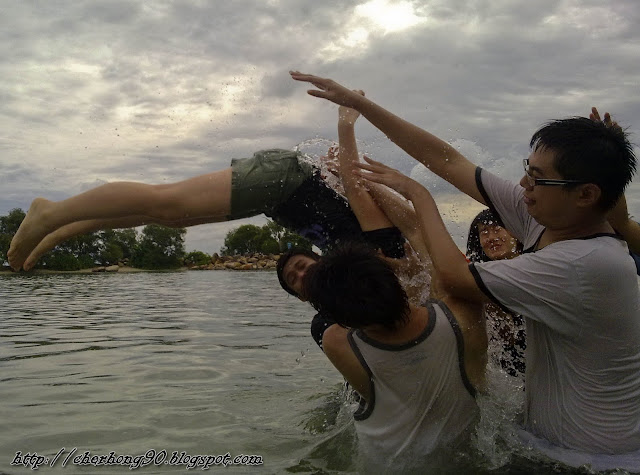 And of course, there's no minimum number of flipping time! Flip as many times as you like!

With so many different activities, the Sentosa beach outing is a must go for all MSL freshmen! It's part of our inauguration ceremony for members. Lots of memories, jokes and of course, electric sparks will originate from this one trip. It's not surprising actually when you have game masters asking you to put your head unto another girl's butt to collect water. Though it may be tiring, it's definitely worth it.

And speaking of being tired, i think i'll be crashing soon. Waking up at 5 am after only two and a half hours of sleep followed by non stop activity (like blogging) all the way til 4 am is not a good way to keep yourself alive. Call the police if you don't see me blogging tomorrow ya? ZzZz...