Everything With Fries, Holland Village makes me go WTH!

I've been wanting to do this for a long time now but i never liked blogging about food so i guess the want got pretty forgotten somewhere. Well at last i got the time to do it now that it's lunchtime and no freshmen are checking in into Eusoff yet.
I went to this cafe some time ago, called Everything With Fries in Holland village and boy, must i say the experienced sucked. It sucked so much until a non-food blogger like me was compelled to write a post about it to express my dissatisfaction. You see, i'm not used to confronting people heads on if i'm unhappy so this blog is the only place i can rant about things and people i don't like. 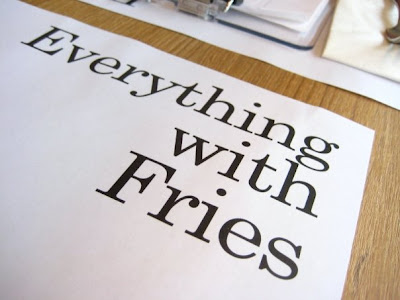 I followed Xian You's footsteps and cooped this picture from Google Images
The first bad impression that i got is when i saw the menu. A frigging four pages only! So little choice. And most of the main meals are with bread, eg sandwich, burger etc. Not wanting to take any bread, i have no choice but to take the pork shop. WTH. Menu fail.

Next up, i saw them preparing the drinks. For a cafe that charges more than almost 4 dollars per drink, you would expect the drinks would be at least, err, drinkable and also presentable. Take their orange juice for example. For a cafe located in Holland Village plus the high price for it, you would expect the orange juice to come from a real orange at least. But no, they had to use Sunkist orange juice. Not to mention that the juice is bitter. I mean, WTH?! 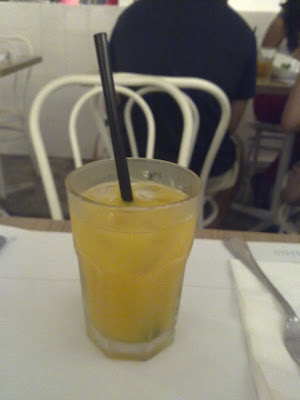 The bitter fake orange juice
My root beer float was another failed drink. Really did not live up to my expectations of a root beer float. They just put in an ice-cream and just pour in just one third of the root beer from the can. The rest of it they just put it in to the fridge. Another WTH?! moment. If i knew they were going to do that, i might as well ordered just root beer alone. It's much cheaper that way and i at least get more drinks. In most cafes that i go to, root beer float is always served in a larger cup, which explains the more expensive price. In Everything With Fries, they use back the same cup which is already so small. By the end of the day, i finished my drink almost instantly and have to add 3 cups of sky juice. 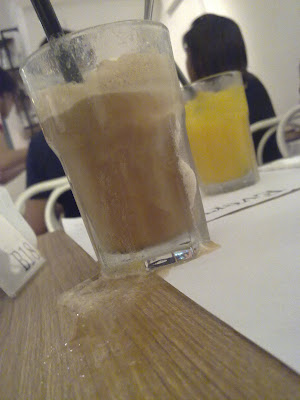 Failed root beer float!
OF course, i have not even mention about the food yet. With the name Everything With Fries, it's not surprising if there's fries everywhere. The problem is, they choose to spam all the fries and make your main dish as small as possible while still charging a price above average. I guess it's part of the marketing plan. They hope that by eating all the fries, you would be too stuffed thanks to the fries and would not mind if the main dish is small. A good way to maximize profits. WTH. 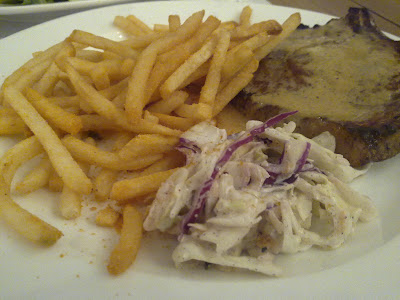 Look at the amount of fries! More than 50% of the plate. Ultimate WTH
And to culminate the day with one big WTH, when we ask for chili sauce, the waiter happily walked up to us and said that the chili sauce is finished. He could however, give us the bottle and leave the chili sauce scrapping up to us. WTH!! 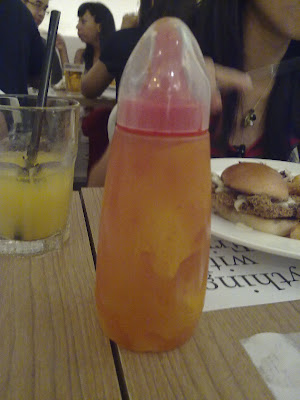 The final WTH comes from this chili sauce bottle!

My final verdict: DO NOT GO TO THIS PLACE. Definitely not worth the money you're paying for.