Avatar was not an original idea!

Deep within the walls of Eusoff Hall, an otherwise normal hostel in National University of Singapore, there is this room. A room inhabited by geniuses of the 21st century (Quoted from Tan Chee Eng's " I m a bloody genius.. " in his Facebook profile), photographers, videographers and people whom you find when your computers is broken or when you need someone to take photographs of you. A room called EusoffWorks room.

In this room, you'll occasionally find some gems and insights provided that the EusoffWorks bosses are there. And during one of my visits there, my former boss, Chee Eng (or was it Timothy?), unveiled to me that the movie that i found so awesome, Avatar, was actually not a genuine idea! So much for the 10 years waiting to get the technology and a great storyline when the storyline is very similar to one of Disney movies a long time ago.

Confused? Read the below image to understand what i'm talking about:- 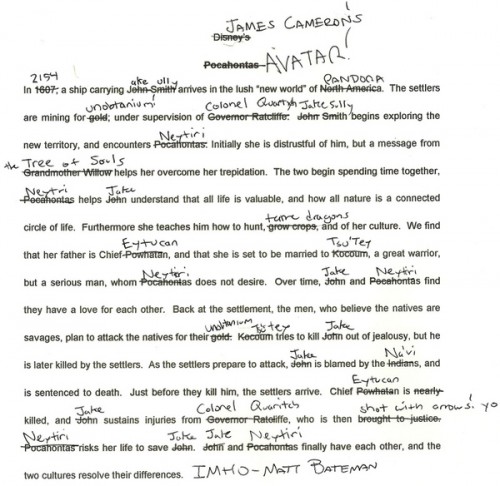 Not convinced? Perhaps a video or two from Youtube might prove the point further. First, watch this video of the original Pocahontas trailer.

Okay, now the same audio is applied to the movie Avatar.

Notice anything similar. As far as i know this controversy has been going for quite some time now in the internet. And i didn't know until my visit to the EusoffWorks room. Looks like James Cameron took the story of Pocahontas and just bring it to outer space and put some 3D effects in. And the way some people put it, they think that Pocahontas is a way better movie than Avatar in terms of storyline.

My point of view? I was too young to understand Pocahontas movie when it first came out :p
I wouldn't mind watching it again though.