My 2 Cents Thought on the BHP Incident

At first i thought about something centipede related today but changed my mind when i came across 2 blogs talking about the same thing (http://colourlessopinions.blogspot.com/2010/06/fuck-bhp.html and http://standwithgiants89.blogspot.com/2010/06/this-girl-could-have-been-saved.html). Since the fellow who started this on FB wanted this to be viral, i thought i could help out.
The story revolves around an accident, two seemingly cruel BHP attendants and the thought that how a life could be saved if the two BHP attendants had not chose to guard over their fire extinguisher so jealously. The whole of the story could be found here:-

this morning approx 3.20am, at Cheras Tmn Pertama roundabout,

saw a freak accident, involving a Vios, Myvi and a Lorry.

im one the first badge who arrive, mean it just happen maybe seconds ago.

Vios believe to be turtle and badly damaged. When im passing by the vios, rear passenger started to pull out the front driver and front passenger.

then when i pass the Myvi, the car was totally sardine. Heard one girl was yelling cos piined inside. I stop my car then run towards the myvi to offer a hand while calling 999 emergency line to request for ambulance and bomba.

then saw fire spark at the engine bay of myvi. while still on the phone with emergency line to provide more details, i run back to my car and drive to BHP station which is just less than 500m away from the scene.

the BHP attendant claimed dat the door cant be open.

then i shout at him, i need it! i want it! someone is pinned inside the car and its started to burn!

then the BHP attendant keep repeating he kenot borrow and open the door.

then i was like WTF! if ur kiosk is burning can u come out? then he replied yes.

then he still say he kenot open the door. Then he say his boss wont allowed to borrow. WTF!!!

then i started to amuk kicking the kiosk and punching the glass of the kiosk.

i even throw my IC to him say that if im dun return u report police.

i saw i borrow.. if i use it i will pay for it. then he keep on just smile at me.

then he ask another partner to come out. Then i start shouting and yelling at them with bad words saying dat if the girl dies you two are the murderer.

then the 2nd BHP attendant shout back at me.

i demand for their names, i told them i would complain bout them,

then the 2nd attendant copy down my number plate and said that all my acts been recorded on CCTV and he gonna report to police tumoro. I challenged him.

then i drove off back to the scene.. the car was totally burning and the poor girl was burn alive inside.

then i spoke to the Bomba and PDRM how many casualties was inside. they told me one girl.

Then i spoke to PDRM about the incident happen in BHP.. then the policemen also scold with anger WTF with them.. if i could get the fire extingushier.. the girl might be saved.

then the Policemen ask me to go police station to report a cover about the BHP, and he assured me that the stupid BHP wont get to report on me.

Personally i would like to ask, how much does 4 fire extingusher cost? isit more expensive than a life?

would like to ask the BHP petrol station's boss! u cant afford to lose 4 fire extingusher then u better closed down your station!!!! F*** you boss!!!!

and this is to BHP MALAYSIA!! seens your procedure to keep all safety gadget inside the kiosk... if anything happen during refueling... is your attendant gonna open the door to help? seens he claimed that the door cant be open after hours??

i personally from now on will boycott BHP... i dont know how about you all!!!

gonna give BHP HQ a call tumoro... see what the f*** will they say about this kind of safety measurement they have!!!!! 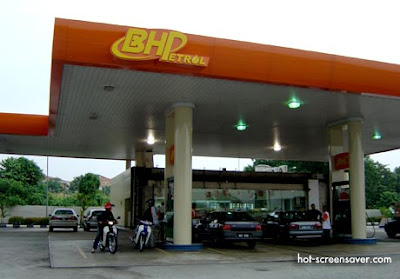 A typical BHP Petrol kiosk
Well the reason i chose to blog about this was because of the majority of comments i saw from two of the blogs. If i'm not mistaken, some are blaming the BHP attendants, some are saying that is life and we should not lament so much and some say we should think from the workers shoes and understand that it is not their fault. Excalade, on the other hand, says that it is the whole system that produced those two workers that should be blamed for this incident.
Who honestly are the people to blame in this incident? The attendants for failing to act morally? The writer for being so rude until the the BHP attendants misunderstood him? The boss of the BHP petrol kiosk for making such stiff rules until his workers are so terrified of him? Or the whole system that produced us humans that are so insensitive to others and choose to take care of our own butt instead of others? Or just blame it on our driving skills? We are Malaysians mah, cannot be blamed that we drive badly.
Of course, if i could answer that question, i could solve all mankind's problem and there would be world peace tomorrow. And win myself a Nobel Prize in the meantime. 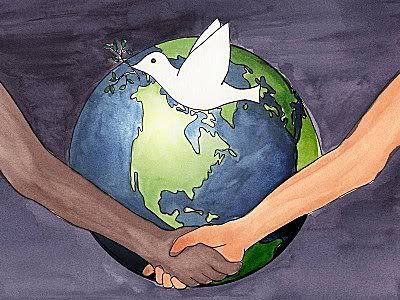 World Peace!
Of course, all around the internet, i'm assuming that there are now two types of general reaction when people read about this. One would be to screw up the BHP attendants real good because they suck and the other would be lamenting that it is not the workers fault but the fault of the society itself. It's Malaysia anyway, the land of the rising crime, so if we choose to help we might get robbed back in return.
My 2 cents thought?
Mahatma Gandhi's quote come to mind. Instead of blaming the workers or the society, why not blame yourself?  Because indirectly, the society is the product of our actions (or rather inaction). We must be the change we want to see in society. Be more helpful to those who are in need next time.
And yeah, even if it means getting robbed back in return. Good deed does not require a reward. And if those idiots choose to abuse your kindness, let them be. I believe that there's a special place in hell for the people who choose to rob the those that want to help them. Maybe they'll be burned upside down while getting banged repeatedly by a lorry. Or maybe they'll be touched and realized that abusing other people's kindness is stupid. As for me, at least i know i'm doing a good thing for the betterment of society.
Kind of radical, but hey, no one said that it'll be perfect. I'm just offering another point of view to this matter.
Labels: Random Rantings