I should really get earplugs

A note written by me during an 8 hour long bus ride from Singapore to Ipoh, 10.45 pm (pardon the strong language, i was half asleep and half sick at that time):
An idiot 2 seat in front of me has decided to whip out his laptop and play computer games with the volume turned up to the max. I don’t know what the other passengers are thinking, but I find it extremely annoying. I’m already half dead because some random viruses and bacteria have decided to attack my system and now I can’t even get some rest. Come on, playing computer games in a bus? Your screen is already bright enough but you decide to top it all off with sounds of guns blasting, bombs exploding etc. I don’t know what that guy is trying to show, either he has extremely good skills at playing computer in a bus or that he has a computer, but I don’t find it funny. People nowadays really fail at civic mindedness.
Now I’m faced with a 3 choice dilemma. I can walk up to him and ask him nicely to at least mute his computer, or I can fight fire with fire by taking out my own laptop and blasting some random sounds back or I can do nothing and pent up my anger. Being the timid and pacifist I am, I think I’ll stick with the third choice. Besides, since no other passengers find it annoying, I guess I’ll look pretty stupid if I’m the only one walking up to him.
On my opinion, people like that fella in front of me should be taken out and shot for failing simple civic mindedness common sense. 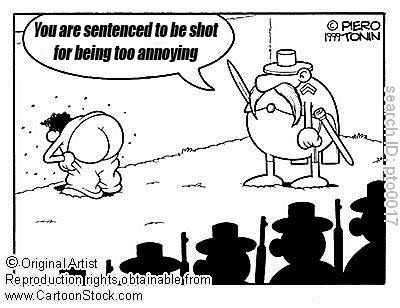 Oh well, i could always rant about these kind of people in my blog.
Labels: Rantings