A New Shrek Movie after "Shrek : The Final Chapter"?

Singapore, 30th May:- With the final installment in the Shrek movie franchise (Shrek : The Final Chapter) finally out, many fans are sad to finally bid their green ogre hero goodbye. Shrek have in fact proved to many people that although you're green and fat, you still can generate lots of cash, a feat no one can achieve in the real world. That alone have inspired many to faithfully follow the Shrek franchise because they can learn how to get rich and famous easily, minus the final part where Shrek discovered not only he did not become handsome but his princess became and ogre of course. (If i was Shrek, i would have jumped out from the window during the final scene in the movie)

The people at Dreamworks are also depressed because of the fact that they have to finally let go one of their finest creation. However, the author of Lukey Ranting's suspect that losing the chance to earn tons of money by using the green ogre idea again and again is the main reason why people at Dreamworks are mainly depressed. For many others on the other hand, finally seeing the end of a green ogre who over-appear in the silver screen is a cause to celebrate. (No more green ogre, yeah!)

Recently however, rumors have been circulating in the cyberspace that producers at Dreamworks have in fact not yet gave up on their green "cash generating machine". There have been allegedly talks going on between Dreamworks and a Singapore registered to produce a sequel to the final installment of the movie. Yes, a sequel.

This time however, Dreamworks plan to change the entire concept of the movie to more of an Asian one. According to a Dreamworks spokesman, the new concept is aimed to attract more Asian viewers who never seen Shrek before to finally experience the green thing everyone is talking about. The spokesman also added that the majority of the people in America and Europe have begun to grow sick of Shrek and they have no choice but to tap into the Asian market. Dreamworks also plan to release a 400 episode Shrek drama series as another project if the Asian Shrek movie is successful.

So what will the next Shrek Asian movie be like? Sources have yet to confirm the exact storyline and cast but Dreamworks have agreed to to reveal part of the upcoming Shrek poster as publicity effort to try to create more buzz for the final Shrek movie after the so called final Shrek movie now in cinemas. 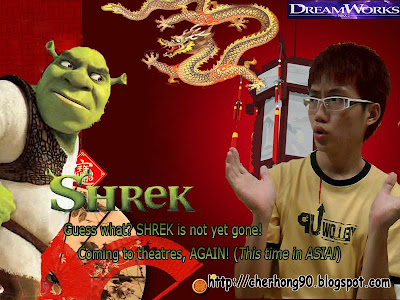 Poster for the final final (really!) Shrek movie in Asia.
p/s: I'm really doing this because i simply do not understand the logic of trying to have too many movies of the same title
Labels: Parody Random Talk Cock