They don't make video games like they used to. What happened to the good old days where playing video games only involved sitting in front of the TV with a video game console and all you had to do was to just move one or two fingers at most?
I've heard before that the Nintendo Wii requires some movement to play, but i never imagined the amount of action involved. By the end of my first Wii experience in Carolyn's house, i was panting like a dog. I think they should have at least included a warning sign for the typical video game players who do not exercise much like me.
Something like:- 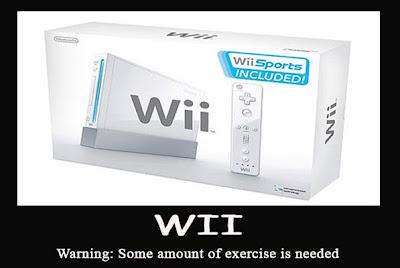