Rent The Movie (when i should be studying)

The time of the year is here again when everyone battle it out to see who can stay awake the longest. The time when stress levels are at an all time high with tensions running high among the students. The time that everyone in university hates. The time of exams.
And guess what me and my bunch of friends were doing last night?
Watching a movie called Rent!
(when we should really be studying...) 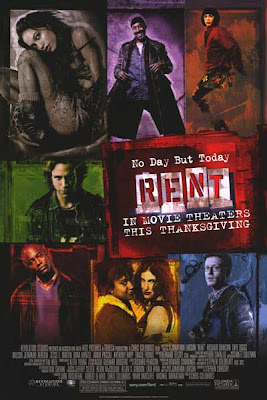 I pretty much suck at writing synopsis, a really good movie with good storyline can turn pretty boring if it's left at the hands of me to write a synopsis. So here's the synopsis i cooped from some random website:

And for people who are lazy to read through all those words, here's a trailer to substitute for it:

Personally, i like the movie very much.
(Dunno why on Earth RottenTomatoes.com gave it a 48% though)

Being raised as a Christian, from young i have been taught of the rights and wrong of life. That "our" way of living was correct while others are wrong. It's correct to fall on love with someone of the opposite sex (heterosexual) but it is wrong to make someone who shares the same sex with you as your soul mate (homosexual). I have been taught to view these people as a disease in society, that their lifestyle is determined by their own choices and they have no one to blame but themselves.


The way this movie focuses on the life of these people who we consider as the outcasts of society; transvestite, homosexuals, drug users and people who suffer from AIDS coupled with all the thought provoking music is really an eye opener. Somehow, i have come to think of my life as being superior than those of these outcasts. But one question that this movie managed to knock into my brain was:


Since when being different means it's wrong?


Well, maybe all of us should stop being so judgmental and learn a bit from this song from the movie:

It's time to start loving!