Imagine that you are in a school.
And imagine that a person whom you dislike, but everyone else seem to like him/her, is running to be a member of your school's top student post, either a head prefect or a student union leader.
Imagine also, that you know a lot about this person. You have worked with the person before and you know of the various negative traits this person have that could possibly impact the whole committee that this person is joining in a real negative way. Talks with people he/she worked before produce the same perception about him/her. But others just don't seem to know! 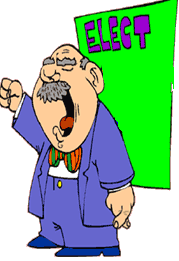 What would you do?
Stand up against him/her, gathering supporters to not vote for him/her for the sake of the school you love. The last thing you want is an irresponsible person to screw up the whole committee in charge of everyone in your school. Yeah, you might make some new enemies and destroy some friendships in the way, but that is not important compared to what you're doing for the school. You know this person, and you must do something.
Or you could just stand by the side, doing nothing and maybe even play together with him/her. If the people want him/her to be in the committee, they must have their reasons. So you just vote for him/her and see how the committee turns out.
If nothing gets screwed up, then ok, you have done a noble move in not judging people critically. Maybe people do change and giving people the benefit of doubt is good.
But in the more likely case where everything gets screwed up, you could just buy a popcorn and watch the unfolding chaos that happen. Where else better to get free drama?
Hey, it's not your problem anyway, because people refuse to see who that person really is in the first place. And there is also really no point to get people to go against her because it is something like a gossiping activity and people might not trust you. Besides, just let his/her legion of supporters to deal with the mess this person created. So why bother?
You can save yourself from one heck of a political headache.
Labels: Politics Rantings