Disclaimer: This post contains extremely strong language. Language that if uttered by an underage child, results in the child being grounded for a minimum of 3 weeks. Please leave now if you cannot stand vulgarities. Don't blame me, blame the anger hormones that are blocking my logical thinking area in my brain

It was 4 fucking am yesterday when i was woken by a loud shrill ring. I recognized the sound as an alarm ringing. This sound has been the cause of my early morning wake ups for the past 6 months. Because the owner of this alarm likes to wake up early. Problem is the person who always wake up first is me, not him.
But the normal ringing all happened after 7 am, a time that i could not complain much because the sun is up and shining. But this time, it's fucking 4 am! Nobody wakes up at 4 am! Except my grandparents who were vegetable sellers who need to go to the market early to set up their stall.
Don't tell me that university students now work part time as vegetable seller?
"It's OK", i said to myself.
"Maybe, after the owner wakes up, then i can go back to sleep and continue being a handsome superhero in my dream."
I dunno about this, but somehow, i think the owner hates me.
Or he is a derivative of the famous spoon killer, who now uses yet another scary technique to kill people over the years.
If you have never heard of the famous spoon killer before, you might wanna see this video to know more about him.

I was correct.
The shrill ring stopped, but later i heard yet another horrible sound that put the fear and WTF?! into my soul.

It was weird music. It sounded like those music that you hear in the movies whenever a climax scene is approaching, especially in those horror movie where the hero is left alone, his friends all murdered, to fight the evil.
The hero eventually dies of course, it's a horror movie btw, nobody survives.

I couldn't tolerate it anymore.

7 am in the morning is OK but 4am?!
WTF, i need to sleep OK?! There is a stupid class tomorrow which i had to do an idiotic presentation. So i had to fucking get up from me bed, moved my ass out of my room and hunt that music down.

Strangely, as soon as i opened the door, the fucking music stopped.
Finally! I could get back to sleep. Or not.
5 minutes later, there goes the music again.
I was like, "Is this some kind of sick joke?!". So i had to freaking drag my ass out of my bed again, and find the source of it. Managed to track it down to one room, banged on the door but could get no response.
Why the fuck must i do this anyway? Is it worth wasting my energy just to get some civics understanding into that asshole?
Eventually, i gave up. So for the rest of the night, or morning, it's already 5 am anyway, i had to endure a alarm music that comes every 5 minute until my body could not take it anymore and i fell back asleep.
This is learning tolerance, at the maximum level. Guess all that bullshit about going going to university and learning things other than academic stuff is correct after all. In my case, i have to learn how to live with idiots who have random sounding alarms and still score well for stupid university exam.
Thanks to idiots like that. I'm now officially classified as an endangered species.
Because i look like these now: 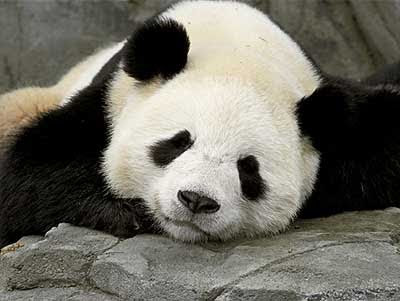 p/s: I know i'm a bit harsh in this post but please forgive me, a human tolerance can only reach such a level before i start to explode. For the sake of not getting blood everywhere if i explode, i had to channel this pure anger plus annoyance into some place. If you think i'm talking about you in this post, yes, i admit that i'm sensitive to sound (after all, i could only see me waking up to hunt that sound down) so don't worry about me. Either i'm buying earplugs or getting a shotgun the next time another weird music wakes me up at 4 friggin am in the morning. Thank you.
Labels: Life Rantings