Of Politics and Adidas

If there were a competition today to find out which race have an insecure self esteem problem, the Malays would win hands down. Not the Malays in Singapore or Indonesia, i'm just meaning the Malays in the so called "Tanah Melayu" or Malay Land in the literal translation.
Before you start accusing me of being a racist, i need to clarify that i don't mean all the Malays in Malaysia, just the majority of them whom i always see at headlines making all those racist statements. Just yesterday i saw another piece of news stating that more than 50 Malay NGOs have formed a so called "consultative body to defend Malay rights, Islam", which is one of the prove why that i say Malaysian Malays can win the inferior complex competition hands down.
You see, Malaysia already have every imaginable measures to "defend Malay rights", from the country's constitution, economic policies (NEP), quotas (entrance to university) and even discounts when buying house. Yet time and time again they keep harping that other races are out to get them, their rights are being eroded, their country is being taken away and so much more.
If this is not paranoia to the extreme, i don't know what is.
I keep wanting to believe that moderate Malays back in Malaysia form the majority. People like Datuk Zaid Ibrahim or even Nik Aziz, who believes in moderation and tolerance, not screaming kill every time they see a Chinese. Sadly, this does not seems to be the case because it is the racist people who dominates the top cabinet or government post in Malaysia. People who believe in race superiority.
People like Rais Yatim, the famously notorious Information Minister. After making his famous "Tweeter and Facebook is BAD for society" statement, which helped to put Malaysia on the world map because the topic became Tweeter's top 3 most tweeted topic, he is back with another plan to make Malaysia famous.
"Malays urged not to marry Westerners", he says.
Another move to make Malaysia one of the joke hubs in the world. Since when our dear Information Minister decides to become a marriage counselor? And he's just using statistics from a Malay sociologist to make his statement. Well, like all UMNO Ministers, i don't expect him to have any brains. He has failed to take into account why marriage with Westerners don't turn out well. Is it because Westerners are really bad or is it your country's draconian law that requires a person to convert to Islam if he/she decides to marry a Malay the problem? Have you used data from Singapore or Indonesia to verify your point?
Sigh, judging from the current events, i don't think Malaysia is heading anywhere near good with these paranoid racist people in charge. So much for the information age helping to educate people. But i guess that when you choose to be ignorant to the facts that it is not other races that suck, or sucking has nothing really to do with races anyway, just your mentality, no matter how much information i give you also useless. Like they say, ignorance is a bliss, which may be one of the key factors UMNO choose to be ignorant.
The thing that i fear most?
Another racial riot sparking out again. Because looking at history, whenever in a country there's this racial superiority or racial paranoia going on, and without any measures to stop it, it's bound to get bloody. Look at the Holocaust in Germany, look at the genocide at Rwanda between the Tutsi and Hutu, the massacre of Armenians in Turkey or the May 13 racial riots in Malaysia. Yes, i'm comparing these few events together, because they all share the same elements.
All these started when a particular race begins to feel unease towards each other, thinking that the race they belong to are genetically more superior then others when science has proven otherwise. When people start believing the lies of the authorities saying that they should protect the rights of their race. When although living together for so many years, sharing so many things together, they decide that all of these do not matter compared to the matters of their race. When they decide that killing is the only reasonable way out.
Of course, this would be a worst case scenario. But i'm just afraid. I hope none of these will come true, that more reasonable Malaysians will stand up and fight these blatant racism practiced by these goons who think using their skin color.  Like the old saying goes, the only way for the bad guys to win is for the good people to do nothing. Which i hope is not going to be the case in Malaysia.
As for me, i will do my part. I will register as a voter and go back to vote no matter how hard it is for me come 2013. Like what the handsome Gandhi said, be the change you want to see in people. And for Malaysian readers who feels the same way as me, i hope you will to. Lets not sit and fold our arms while we watch our beloved country sink. At least let us do something to somehow salvage or fight for whatever we believe in. A diversified but yet harmonious Malaysia. The Malaysia we all knew and want it to be.
*****
On a much lighter note, and i know i've been bragging too much about this already, but i couldn't really resist. Because this is really my first time buying a branded good.
I've got myself a cool Adidas bag! 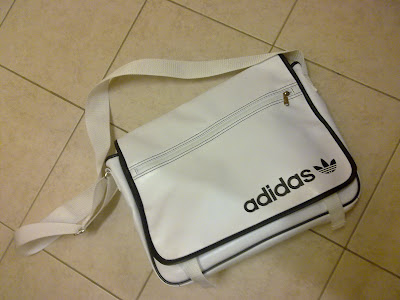 Well, it's white, which means it can get dirty quite easily but i really loved the design. Besides, i got it at a bazaar at my uni at a quite reasonable price. Another reason why i like NUS so much, there's always bazaar with cheap sales and you don't have to walk far for it because it's all in campus! You can even go shopping during class breaks!
Anyway, the bag costs SGD 48.30, which is around RM 95+ like that, which i don't know is a good price or not, because this is really my first time buying a brand like Adidas (to be honest, i never had any Nike or Adidas before) so i don't really know price which can be considered to be cheap.
But from the colors, design and the fact that i don't have to take any transport out from campus and waste time buying it, i think it's quite worth it. Wohoo~!
Labels: Life Updates Politics Rantings