I’m still waiting for an answer. An answer that I hope I would not have to wait forever to get it.
I wonder why sometimes the world must use such unfair standards when it comes to judging people. Why a guy have to be as handsome as Edward Cullen, as athletic as Christiano Ronaldo, rich as Bill Gates, as smart as Albert Einstein or as talented as Adam Lambert in order to be liked by others? Why can’t someone who has nothing of the above, but is able to offer his whole heart in its place receive the same treatment as those who have the attributes that are mentioned above? Physical attributes, such as looks or talents, are often determined by birth while the capacity to show love for example, needs many years of hard work to truly learn the meaning of it. So why we often choose something that is pre-determined before birth over something that’s needs to be learnt and cultivated?
Sometimes I think that the world use a very unfair standard to judge people. We are often not judged by how we think or how we feel, but rather by how we look or how we dress. But who am I to complain? The world is set like this and there’s really no point in fighting it. Cheers to a *%$#@* world. 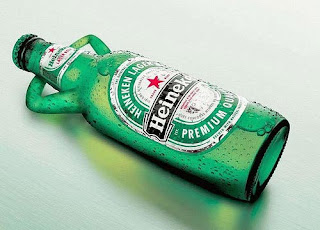 I'm writing under a partial influence of alcohol.
Pardon me for the strong language used.
Cheers!