Watched a movie again together with my uni friends in the hostel's lounge.

Movie of choice this time was "Lemony Snicket's A Series of Unfortunate Events". 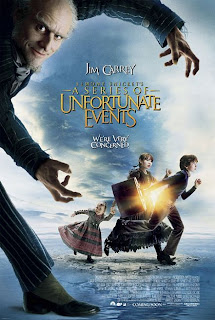 The movie is about three orphans, the inventor big sister Violet, the brother who reads and remembers everything, Klaus and the baby sister who bites through anything, Sunny.  Their characters is quite interesting to watch as their strengths compliment each other weaknesses.  The 3 orphans have to face up to their so called uncle Count Olaf whom just wants their inheritance money after their parents died in a fire.

Overall, i say the movie was quite nice but dark sometimes.  Not the typical Disney movie you would expect as there are many conflicts and plot twists in the movie.  Which is not quite good because by the time i got to the climax, it did not feel much like the climax due to the earlier plot twists and events.  However, throughout the movie the plot had me sitting on the edge of my seat because you'll never know what to expect from the villain-ny Count Olaf.

The acting of Jim Carrey in this movie is also commendable.  This is the first time i see him acting as a villain and honestly, he is a really good villain.  Good until it made me hated him.  And it's quite a new experience to see him in a role other than the goofy ones he normally play.

Sunny the baby in the movie is cute too!  At first when Jia Yee first squealed at my because of the baby's cuteness, i did not believed her that much because i've known her to go crazy about babies.  But undeniably, the baby is cute when she babbles with subtitles.  Kudos to the director for his hard work with the baby. 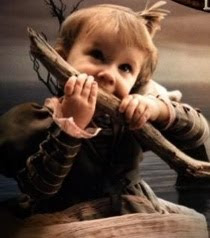 If you're thinking about which movie to watch while chilling out with friends, this movie is not bad.  There is a balance between laughs, suspense and mystery.  I've not read the book yet, but i think i will soon.  I'll give it a rating of 8/10.  Worth watching.  One warning however, would be the adults in this film especially the Mr Poe, the banker who is supposed to help the children.  He could be quite stupid.

p/s: Thanks Jia Yee for the recommendation!  I'll look for you if i need ideas for movies next time!