Went to watch Princess and the Frog today. 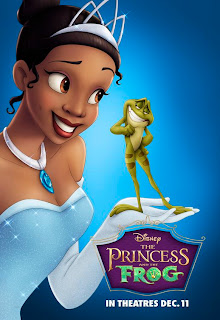 Despite what some "mature" people might say that it is a cartoon movie from Disney so it would not be nice because it is for small children, i find the movie quite nice.  Being a teenager or young adult does not necessarily mean you have to start watching horror movies with everyone getting killed by cancer or a mad fella with a chainsaw every time you visit the cinema.  It's nice to become a kid again and immerse yourself in a happily ever after fairy tale.  Besides, it would not hurt watching movie that is funny, exciting and touching at the same time.  And it adds a new twist to a story that we heard a thousand times quite nicely. Not forgetting, for the first time in Disney cartoon, i think, it has (spoiler alert!) someone dying!  A perfect movie to watch with friends or the special someone.

I also like the message that the story is trying to bring out.

(Another thing that i like about Disney movies, it actually makes you think after the movie)

What we want may not be necessarily what we need.

In fact, i heard this a lot of times in church!  But putting this in a movie makes me take the message from a whole new different perspective.

We as humans are greedy creatures, to be honest.  We want lots of things.  In fact, there may be no end to what we might want!  We might want a high end computer to play games, a big house to live in, lots of money to spend, good looks and admiration from people.

But we do not realize that usually the things we want might not necessarily help us to live a better life!  We might think that we cannot live without them, confusing our wants with our needs, when we can do perfectly fine without them.  Sometimes, our wants might even cause us to lose something precious or mess up our lives.  Example, a high end computer, may equal to more time spent on playing games and not focusing on studies.  Lots of money to spend might cause us not to value the importance of money and may be even have us end up being robbed.

Lets talk about the boy-girl-relationship or the boyfriend/girlfriend issue.

Almost all of us would want a boyfriend/girlfriend.  It may be due to various reasons like peer pressure, the trend in society nowadays, media influence or the guy/girl who is putting the pressure on you.

But are we sure that a boyfriend/girlfriend would make our lives better?  Especially at a schooling age?  Are we sure that we cannot survive without one?  Are we willing to cope with the responsibilities and burden that comes with the romance?  Most importantly, do we need it?

I noticed most of the time many teenagers got into a relationship just because they merely wanted it for the sake of having a relationship.  They want to feel good, enjoy the warm fuzzy feeling without realizing that a relationship might also mean heartbreaks and disappointments.  Not a very good idea if you're not ready to cope.  And when breakups do happen, it's time to blame it on everything and everyone without really thinking might it be our fault for confusing what we want and what we really need.

We might want to be in a relationship now because there is a hot guy/girl confessing, but do we really need someone whom we are not close with and is confessing to us randomly or do we deserve someone who is better and understands us more though the relationship might not be now?