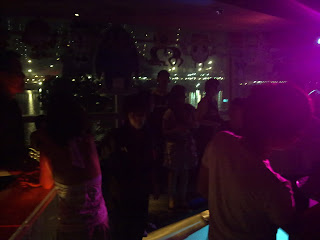 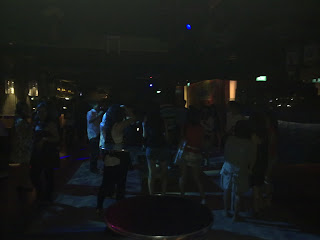 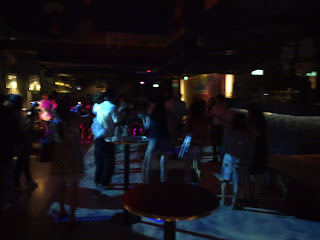 These pictures are taken from a disco/bar/pub during my hall's bash.

"When you choose to take up the cross like what Jesus did, life will not going to be easy for you.
You will find yourself constantly struggling to make the right choices as opposed to the world's choices.
And sometimes you might wonder you have made a correct decision of taking up the cross.
But rest assured, that there will be no greater peace or joy than to have God in your life compared to all the world riches or woman you may find if you have chosen the world's path",
this was what one of my good friend in church once told me.

I often find myself in the position of that fish in that picture, swimming the opposite direction of where all other fishes are swimming.

For example, when the trend now is sleep with whoever you want,
i, myself, as a Christian must abstain until the day of my marriage.

I went to my Hall's Freshmen Bash today.
And for a small fish like me, its certainly surprising for me to see how the atmosphere during the bash was like.
Guys touching girls like there's no tomorrow and french kissing if she smell nice, those sort of things.

But i sincerely believe that God is not a sadistic person. He do not simply give rules just because He enjoys having people obey Him.

I rather choose to believe that what is He giving is some sort of a guideline.

Case proven when i was walking out of the pub.
I saw a couple arguing quite badly until the state of shouting.
They do not even care if they're in the public.
She's accusing him of touching or snogging some other girl.
Break up seems inevitable.

And you ask why Christians cannot get drunk?


So i would gladly choose to stay sober and stay within the guidelines rather than breaking everyone of them known.

Freedom is not doing whatever you want.
Freedom is the ability to control what you do not want to do.

According to a research recently done by animal scientists, apparently the worrying news of wolves population declining nothing but a false alarm.

The study states that although natural habitats of wolves are being destroyed by humans, wolves actually manage to find a new habitat among human population in the city.

The study shows that this new habitat is the new meeting place for male and she-wolves to meet up and find a suitable partner.

When the BEER-fruit is eaten, then the pair of wolves will engage in a ritual in where the male wolf will get the she-wolf aroused by touching wherever it can touch on the she-wolf's body.

The process will culminate in either the male wolf's den, the she-wolf's den or just in the toilet of the bar/pub/disco. You see, wolves a really urgent need to let go and they just really do not mind.
In fact, some male wolves have been to known to have multiple partners to increase the chance of producing offspring.

This method have been very effective in increasing the wolves population until scientists decided to put a stop to it by introducing condom.