I'm gonna start this post with a picture of me. 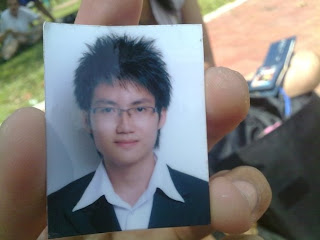 Okay, now that i'm done, i can begin with my post.
(Yeah, i can see many crows flying around, but i can't help wanting to be lame for a moment back there, and i have some reasons too *winks*)

But i would not dwell on that though, because we all know how much dread and despair tutorial can strike in our hearts with all those assignments, presentations and stuff that can sap every ounce of enthusiasm from our souls.


Instead, i'll be talking about my second Psychology lecture!

I regretted taking Psychology, well, at least for the first 10 minutes because i took a look at the textbook that we're supposed to use for this module and it gave me pictures like this:

And the thought of having to go through Biology again took me back to my secondary school days where Biology class pretty much meant hypnosis class, with the hypnotist standing in front bombarding you with names of hormones that help you to sleep in a monologue tone.

That is bad, considering the fact that i am planning to major in Psychology and i could not afford to sleep myself through the four years right?


Luckily for me, i did not end up getting hypnotized as i was busy laughing once the lecturer opened his mouth.
And we wonder why Malaysian education system sucks.


At the end of his lecture, he even thought us Psychology of chasing girls!

Which is why i put my picture up there.

Guys you see, can be divided into two groups, the first being feminine looking guys
(not pondans/ah guas/or transexuals, mind you)
and the other being masculine looking guys.

So, before continuing, if you are a girl, please pick a guy from the below whom you are attracted to without reading the bottom line first, or the fun is gone.

(Picture on the left depicts feminine guy and left is masculine, but they are the same person, just photo-shopped to look that way)


The prof told us that females in general would be attracted to feminine guys but that depends on their menstrual cycle too. If you are at high risk of having a baby, in layman terms, as having an ovum floating inside, then you tend to pick masculine guys because hormones will play a factor in deciding.

But in overall, feminine guys are the main choice.

The reason being that feminine guys gives the impression that they're generally
"less dominant, more faithful, a better parent and less aggressive"
as compared to the masculine ones.


Like my prof put it, if you're a feminine guy, you can always say
"I may not be a hunk, but i can take care of your children".

He also mentioned a lot of other stuff too regarding about these mating tricks but i won't be dwelling on them. If you want more details, just come to NUS and take this course.


Which brings me back to the main reason of why i put my picture up there.
Ahem, am i considered feminine looking or masculine looking?

I have always have the wrong idea from TV that masculine guys get all the gals, and trying very hard to look masculine without knowing the real deal.

Hmm, maybe i should consider going for plastic surgery?