I'm better than you, not!

I have a confession to make.
I need to admit that i have a tendency to do something that i think will make me more superior than the people around me.

Be it learning a new musical instrument, showing off my joking skills or spewing out some scientific jargon that no one except Einstein would understand,
and secretly i hope that by doing this people will admire me and look up to me.

And there will be a sound in my brain that goes like,
"Hey, look at me! I can do so and so. Can you? Cannot right?
Which means that i'm better than you, hah!"


From what i noticed, it isn't only me who is susceptible to having this kind of thinking.
Almost everyone of us would like to feel that we are better right?
Heck, there are even some who will do weirder things than me just to prove that they are better.

Just scan the newspapers daily and you'll see what i mean.

There are those who strap C4 explosives on their body, run into a building and blow themselves up just to prove that they have the guts to die for the religion, it actually not for their religion anyway, because no religion would ask you to blow yourself up because bombs were not even invented back then.

There are also those who would do plain stupid stuff like eating 36 cockroaches in 1 minute just to break a Guinness World Record. (Its true!) 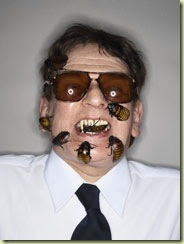 And you have those traditional type that for example study like S*** to obtain a number of As that is ten times more than mine just to prove that they can memorize books better than my computer (Thank God the Ministry of Education decided to cap the number of As at 10).


I believe that all of us, as human would enjoy this kind of feeling.
That we are in some sort of way, better than the person next to us.

Why actually, that we are so prone to this kind of thinking?

Is it that something is missing in our life, that there's a void that we need to desperately climb up the hierarchy of society doing whatever we can to just prove that we are not useless?

Well, for that question, you'll have to answer it yourself.
If i were to continue, people would be complaining about how long my blog is until i dwarf their university thesis again.
Besides, i have serious climbing to attend to now.